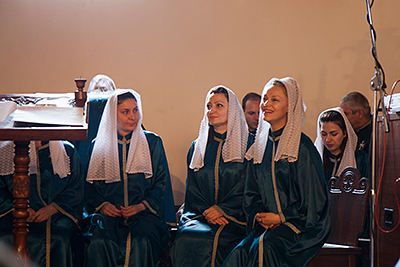 Minutes before the start, the people who were in their various capacities involved in the celebration of Sunday service were all aflutter. The choir members were taking their seat on the raised platform. The girls adjusted the embroidered veil over their hair; in the back row stood the men. The clerics sat down on their chairs on the other side of the balustrade, the faithful gradually filled the space under the high dome. Upon entering the sacred building, most paid their respect by kneeling down and kissing the gospel placed on a lectern on scarlet velvet.

The choir intoned its first hymn, thus giving a start to the solemn rite. Echmiadzin is the holy seat of the Armenian church, and as such, the already elaborate Armenian rite takes the proportions of a grand performance. A line of priests ascended the steps to the altar, the vantage point upon which most of the service took place. They were led in by their chief wearing a violet cassock and a crown; the rest wore a red tunic. The bright colours of their attire contrasted with the black frock of the monks, some hooded, who sat just below the altar. Some had a red stole across the shoulders. I was at a loss interpreting all these symbols in the clothing, but was sure there was a meaning to everything.

All the components necessary to make a grand show were present: the singing, and it is not exaggerated to define it lyrical; the glaring light from the bulbs and the candles; the waft of incense from the burners; the colours of the costumes, the gold of the decoration. The very structure of the church comprised a raised stage-like altar and a real curtain that was drawn at a given moments during the celebration.

When the priest stepped down from the alter holding a metal cross and followed by his retinue, everybody that stood near their passage huddled to kiss the cross. I had no time to think. The procession came abreast of me, and I don't know why or how but my head bowed and I kissed the cross too. I am against superstition, but I like to feel in communion with the place I am in. The atmosphere had dragged me to perform this act, and it was good not to be just an observer. I had played an active role and had felt real emotions for that.