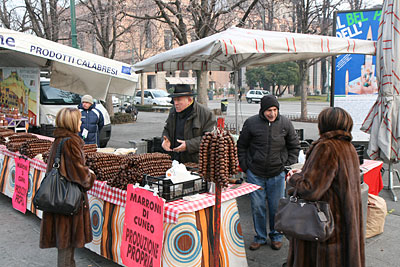 On the 17 January it is customary for lots of towns in northern Italy to host a market that specialises in chestnuts cooked or preserved in a variety of ways. The occasion represents the secular side of St. Anthony’s festival, or the time when domestic animals were put under the protection of the saint in the former rural society. My grandma says the peasants used to gather on the churchyard with all their beasts and then went off happily for a drinking binge. Now a festival on the wane, at least in its religious aspect, it survives as a secular event.

Today I brought along my camera because the cold had frozen icicles on the fountain in Piazza Dante and it looked really nice, but I realised I had another reason for taking pictures with the small market getting under way. On the Sentierone, the smell from the roasting braziers merged with the pungent reek emanating from the strings of smoked chestnuts.

I was to go to the radio studios for an interview on a project we presented yesterday. As the incorrigible addict I am, I decided to cycle in spite of the cold, and I nearly had an accident when I bumped into a car that braked suddenly. I had a narrow escape from serious consequences.

While waiting for my turn, I had a word with another guest of the programme and we commented on the festival that was going on in town. We remarked it was just the relic of what used to be a major rural festival comprising the blessing of animals, later replaced by tractors and most recently in the urban society, by motor vehicles. This man reminded me that this rite still takes place outside a St. Chiara’s church, where a queue of cars crawls up to the priest administering the blessing. 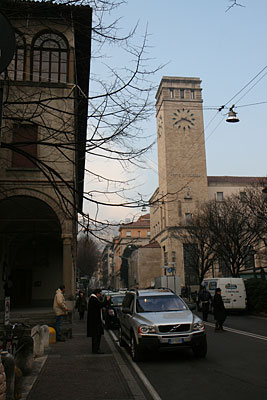 I was so intrigued that after work I wanted to make a detour to that place and have a look. But first I stopped at the market. I had a chat with one of the hawkers, a dignified man wearing a wide-brimmed felt hat. A native of Piedmont, he has been coming to Bergamo for St. Anthony’s festival ever since he was a lad, some fifty years ago. He remembered how people crowded the streets for the blessing and the church service, but now – he sighed – it’s not like that anymore. I remarked it’s actually surprising that the rural tradition should hold on in the secularised society, well after the takeover of the urban lifestyle.

I was now ready to witness the fulcrum of the festival. Next to the church, as predicted, the cars were not an impressive number, but still a few had convened and were queuing on one side of the street. A few wardens were facilitating the flow of the traffic, which all in all was fairly orderly.

As I saw people flocking into the church, I also popped in. The faithful, mostly elderly, were packing the hall and were heading to the altar to take the bread. I was met by a rather repulsive waft of incense hanging in mid-air. It may have been like Arabian incense that is burned in exotic countries and smells like a perfume endowed with a power of seduction; nevertheless, here it worked a completely different effect on my senses. It reminded me of funerals and made me see the church as an enclosed place charged with impending sadness from too many old age people. I badly needed to breathe fresh air.

I stepped out and placed myself in a position with a view on the priest blessing the cars in order to take a picture. I was viewing the rite as an instance of childish superstition, but all of a sudden I thought, “Why don’t I queue up for a blessing too?”. So, for the sake of keeping the tradition, I bowed to the old rite. It was only my bike, but thinking of the accident I’d suffered in the morning I also qualified for protection! 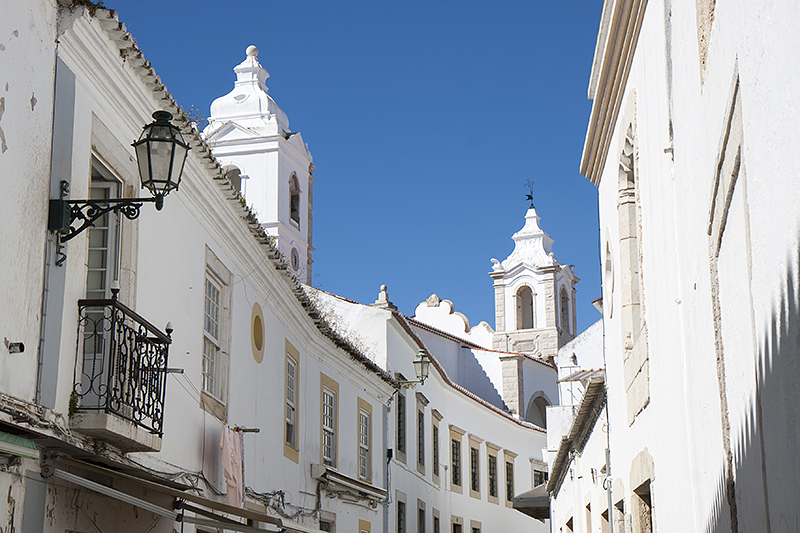