Yesterday was my birthday, but with the busy schedule I had, I didn’t celebrate in any way, not even with colleagues at work. Besides, one was on sick leave and I thought it wise to postpone. At lunch break, instead of going for a meal I went for a work-out session. It may not be a special thing to do, but in fact this was my personal birthday present.

I don’t go to an ordinary gym. My training ground is the Lazzaretto, a Council sports field in the open air, accommodated in what was once upon a time a hospital for the plague-stricken. The compound consists of a large grass pitch fenced off by ancient porches on all four sides, like a cloister expanded to unwonted proportions. I have wondered about how patients were treated here, often coming to the conclusion that they must only have been segregated from healthy people to avoid contagion. When epidemics were not raging this place may have been given alternative destinations.

Today only the name remains to witness the ancient use of this structure, dedicated to St Lazarus, the protector of the plague-ridden. This admirable architectural compound, which has come intact to us, lives a new life in the present, destined as it is to serve as a training ground for sports amateurs and as headquarters to several sports clubs.

The geometry of the Lazzaretto’s white arches shone in yesterday’s bright sun against a backdrop of Autumn colours. The trees had not shed their leaves yet and sported a livery of vibrant hues on their branches. The slanting November sunrays cast a regular pattern of shadows from the slender columns onto the inner wall of the porch. Even the floor lined with round cobbles was a decorative element that caught my eye as if I was watching it for the first time.

In this building only the southern side stands out as a raised body crossed by the main gateway, an arch opening on to the stadium square. The stadium itself, dating from the 1920’s, retains much of its grace only if it is observed from within the Lazzaretto. Outside, the square has been ravaged by the cage-like iron fences that regulate the access to the precinct as if it were wild beasts who enter the arena when a football match is played.

The Lazzaretto is a landmark for , not least because young people flock here to listen to summer concerts or attend other events, much to the annoyance of the sports buffs who complain about the damage to the lawn by the crowds.

I was introduced to this place by a friend who has been a regular for decades. He once surprised me by relating the fruit of years of observation on the shadows, namely how they come to encroach on the central lawn up to a certain date in December when the sun is at its lowest on the horizon, then quickly retreat in the following month or so, until – but as a slower pace – they shrink to their smallest size around Midsummer, hardly touching the gravelly belt at His jogging loop takes into account the shadows, obviously.

At that time I joined the Lazaretto, but eventually dropped my membership for the swimming-pool. However, I have recently decided to renew it, and so I come again as if no time lapse had wedged in surreptitiously. I overhear the same comments in the changing rooms where the amateur athletes’ respective performances are discussed at great lengths. It sounds as if their life depended on that second that changed, if not the outcome of the race, the runner’s self-esteem. Gossip is also exchanged, mainly concerning other companions’ mishaps that are related with a tad of Schadenfreude. Apart from the middle-aged, there are young students and elderly former athletes, who come to build their body or maintain as much physical shape as they can, respectively. 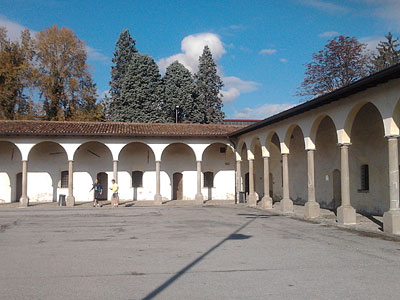 Although I do not feel called in to join in the technical talk or to reciprocate the easy camaraderie that I’ve always felt alien to, I greet all and occasionally pass the time of day with some. I remember an interesting discussion with a history teacher concerning the secret scenarios of WW2, interspersed with the clangs lifting-weights resounding in the gym room.

The Indian summer came with two day’s delay this year, but it was indeed the best timing to coincide with my birthday. On that day, in all simplicity, I came to the Lazzaretto and breathed in a mouthful of fresh oxygen, enjoying the warm sun as my best birthday present.