I was travelling in .  The minibus, or trotro as it is locally known, pulled into the dusty yard of a station and I sprang out the vehicle to retrieve my luggage and find the next bus. A man spotted me and came up to talk. Something in his words sounded familiar, but the accent and the approximation of the language couldn’t convince me that he was really addressing me in Italian.  After all, I conspicuously stood out as a white tourist, but nothing could give me away as an Italian. Still, the man had indeed talked in my language. He explained he had been a resident of with his wife and kids, but lately had decided to spend a stint in his home country because work was not much. And he also wanted his children to learn English.

I felt hurt in my pride that he should consider the teaching of English so poor in my country, but I couldn’t blame him. He was perfectly right. In , like in other southern European countries, foreign languages (now especially English) are taught with a curious attitude: it is as if they were never to be used outside the school walls. Grammar and literature are the main axes on which the syllabus centres and speaking abilities are an optional extra.

In my experience I had teachers who mastered the grammar, were able to explain it and correct exercises, but they were hardly ever heard talk in English, especially in the first stages when it would have been particularly important to make the students realise that a language does not consist of lists of words and sets of rules, but rather the ability to put them together and convey a meaning. I had to wait until I went abroad for the first time on my own (which luckily happened early enough) to realise what a foreign language meant and what sort of horizons it opened.

Teachers don’t fulfil their task if they don’t make the effort to hold a class in English. They may stand in front of a bunch of youngsters who don’t give a damn about the subject, but if they don’t demonstrate the practical use as an alternative means of communication to their first tongue, they only strengthen the uneasiness that is related to handling a foreign language.

An excessive focus on grammar makes the learning process boring and ineffective, although it presents undeniable advantages to the teacher who can sit back, use ready made materials and correct papers without much effort. Besides, especially if a class is numerous, other teaching methods are far more tiring. The teacher, sometimes with the excuse that a mother tongue lecturer will complement his work with a conversation class, will often avoid using the foreign language which seems unnatural and isolates him from the hearers who may not understand easily. But it is the teacher who has to pull down the wall of laziness and bad habit.

Children now start English at an early age, but this policy is only make-believe. If we are really convinced that knowing the names of the colours or the days of the week is a decent start, then we are deluding ourselves. The upshot of the first years of learning a foreign language may just be the initiation into a sterile approach that will perpetuate itself for life. Qualified teachers are needed from the very beginning, not just people who can list words and make the pupils sing in approximate English.

Students are often guilty of wilfully detaining themselves over the vagaries of the language in order to waste the teacher’s time. I have heard schoolmates quibble endlessly on points of grammar, indulging to the Byzantine taste for formal aspects typical of southern European culture, but also doubtless believing that the ultimate goal of studying the language lay in the theoretical mastery of rules, rather than in applying them with a sound pragmatic attitude. When your aim is speaking you have to take plenty of things for granted and let your mind be open and receptive as a child’s. 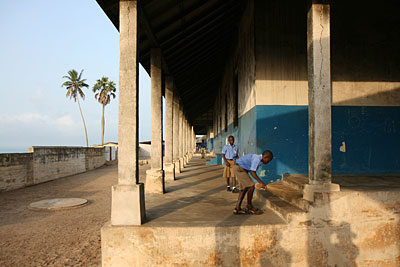 Many teachers suffer from a complex of inferiority for not being native speakers, but let’s go back to and see what happens there. It is true that the teachers have an accent that is passed on to the students, but their goal is certainly met. They are fluent in English and succeed in transmitting their command of the language to their students, who acquire useful practical knowledge.

Granted, the linguistic situation there makes the colonial language essential in its role of language of national unity, and the children are schooled in English in the rest of the subjects so that its use is not confined to the language class. Still, I remember how the voice of my French teacher sounded in my ears when I went to bed on the days I had evening class. However limited in time, hearing her talk in French was a very beneficial experience.

Accent and 100% correction must not be an easy excuse: after all, my worst English teacher was without doubt… US American!