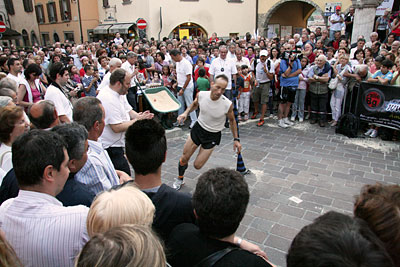 There is no limit to imagination when it comes to inventing festivals. From the wine-splashing festival in Spain to the one in which people hurl tomatoes at each other in an Andalusian village or Ivrea’s orange-throwing festival in Italy, human creativity has found a rich seam to mine. Carnival in the Christian world and Aashura’ in Shiite countries are other examples of festivals where religion intermingles with more secular influences into popular traditions held since centuries. If only for one day, these are occasions to break taboos and disrupt the social order in a, so to say, controlled fashion. After all, even the ancient Romans used to say Semel in anno licet insanire, or once a year it is legal to go mad.

The festival I attended in Gandino last Friday was no less as far as originality goes. When visiting a friend who was sent to this mid mountain town to work as a teacher a couple of years ago, I’d noticed a series of marks in the stone paving along the main street. Each bears a number from 1 to 100 and is equally distanced from the next.

On the first Friday of July a singular race takes place between one man who runs from the central square to the next village at the bottom of the valley and back again; and another man who is supposed to collect one egg at a time and place them in a sawdust-filled wheelbarrow. This race is said to have originated from a wager made between two people in the past and revived exactly 80 years ago.

Standing in the square I could only witness one part of the contest, while a voice on the loudspeaker reported the progress of both sides. The town centre was teeming with people and the high street was lined with a series of little straw mounds to supports tens of fresh eggs.

All eyes were focused on the man shuttling between farther and farther eggs and the wheelbarrow. Turning around the pivot he would get rid of the egg in his hand and dash up the street to reach the next occupied peg. However, only two eggs are allowed to break without penalty, after which, if an egg doesn’t land safely into the sawdust and gets broken, a new one is placed exactly where it was removed and precious minutes are wasted.

People around me were commenting on the race. Some were sceptical that the egg collector would make it, because as a rule he stands less chance of winning. Other spectators were adamant that this year’s runner would win, especially after the egg collector’s face started to contract in grimaces of pain. It may seem odd, but the smooth running all the distance to Fiorano, even allowing for the slope downhill and then uphill, is not any harder than bustling to and fro within a hundred meters from the base, and arguably it even demands less effort and above all no stooping.

As a matter of fact, those grimaces were indeed the harbingers of something happening. Still, it came to me as a bolt out of the blue when, in a matter of a minute, the reporter’s voice worriedly announced that the egg collector’s performance was flagging and eventually said he was withdrawing from the contest. He was the victim of overexertion and tension and in spite of his athletic physique and sporting record, he was unable to pick up all the eggs. Number 68 must be his torment for this year, as 32 more eggs stood ready to be collected when the sports doctor ordered him to stop.

In less than 15 minutes the runner made a triumphant entrance into the corridor opened in the crowd and was hailed as the winner of this 80th edition of the race. He shook hands with his friend the egg collector who had in the meantime recovered enough strength to announce in a still quivering voice that he’ll run again next year as an undeterred egg collector.