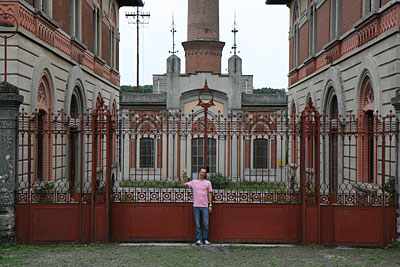 The workers’ houses around the steel factory at Dalmine reminded me of another outstanding example of industrial archaeology. Therefore the natural evolution of my weekend roamings pointed in the direction of Crespi d’Adda, and last Sunday I went there on exploration with two friends.

There are several points in common between the two towns, but also differences, the most remarkable of which is that Crespi was designed to stand as a self-contained village, whereas Dalmine already existed and the workers’ settlement is now engulfed in the rest of the town. By contrast, Crespi’s distinguishing feature, isolation, has been maintained during the century of its existence, but more striking still is that the village has been preserved with no addition or demolition, just as it was created.

This exemplary settlement was founded at the initiative of an enlightened captain of industry inspired by the dream of the utopian town. The scion of an industrialist family of the early 1900’s, Silvio Crespi played his role very seriously and charged himself with a burden the State had not yet taken into its hands. At a time when the issues of security, health and welfare of the working classes had not yet become a concern, his microcosm was centred on the well-being of his employees. On the one hand his paternalistic commitment was supported by the conviction that a fair treatment and a decent life would boost the workers’ performance, but there were ethical reasons too that guided his actions.

I could read between the lines that the huge investments to build the village outweighed those in production with the consequence that the factory was not able to withstand the crisis that swept the world in the 1930’s.

The Crespi’s eventually had to give up the plant and the factory changed hands, but the community lived on. In the 1940’s the village saw a restyling of the cottages, which were painted in Venetian red and green in alternate rows in homage to the colours of the national flag.

I can barely figure out what the working conditions would have been like those days – most probably terrible compared with today – but Silvio Crespi seems to have lived his role with an attitude that we would call one of corporate social responsibility.

He nevertheless remained the boss and I can easily imagine hearing him being referred to in the local dialect as ol padrù. In fact, the family residence is built in the shape of an imposing medieval castle with eclectic interpolations and its belvedere tower looms high over the workers’ houses. It is explained to mean that the whole village was to look like a personal fief under the protection of its owners.

Production in the factory ceased in 2003 and now the vacated sheds stand before an unknown. The vast area has been put up for sale and nobody knows who will invest to acquire it and, above all, to do what. Now it is an abandoned architectural jewel. The high chimney, the ornate office buildings and the iron fence are a joy for the eyes. As I stood mesmerised in front of the entrance to the factory grounds I couldn’t decide whether to focus my attention on the graceful overall effect or let my gaze peer in search of the refined details that enliven every nook and cranny. 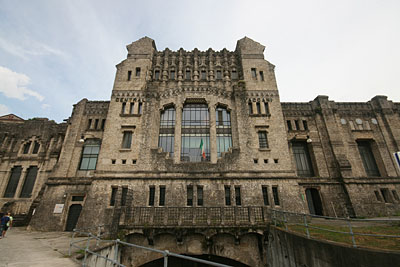 Moreover, the Crespi’s are to be credited for the building of two more architectural gems: the splendid building of the nearby hydroelectric plant at Trezzo sull’Adda that supplied power to this factory, and another family residence at Lago d’Orta built in a delighfully exuberant Moresque style.

With great symbolic power at the far end of Crespi d’Adda’s high street lies the cemetery. Here the Crespi’s mausoleum is a pyramidal structure lined with grey breccia stone. Behind the imposing vault two arm-like structures open like an embrace directed at the simple crosses that dot the graveyard, the last embrace that the factory owners gave the humble, nearly unnamed, folk that had made his wealth.