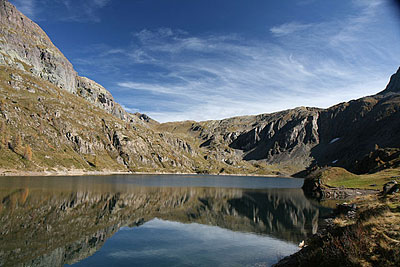 The elderly couple were fit enough to have climbed up to the mountain hut, but who knows at what speed. They were sprawling in the sun after eating a sandwich and a banana, and it was a bad omen that I should sit on its skin. They seemed to be familiar with the area when I enquired about the path I meant to take but the startled expression they put on was not reassuring. They wondered between themselves if I'd make it by nightfall.

As I wanted to do a loop I didn't turn about, and put down their exaggerated estimate to their degree of fitness. That might well be the case, but they had indeed planted a seed of doubt and the damage had been done. I negotiated the hard slope up to the Passo d'Aviasco at full throttle. I sweated, felt my heart pound in my chest because of the overdrive, but hustled on while my mind turned over such questions as What if I get lost, what if nightfall should really catch me by surprise?

Two people were coming down the descent and I asked them. The man made things easy, he said in an hour and a half I would be down in the valley. I took a breath of relief, but then realised this couldn't be true, either. That was far too short a time! Another solitary hiker wearing high-visibility gear was coming down. His fluorescent orange top made his human presence felt like a much needed cure for all the solitude in that mountain desert. I wanted to check my information, but the man didn't seem too keen to break his going – he seemed to be on a mission. He thought for a moment, then said I'd need four hours... Before I had time to react he had hurried off and I was back to square one.

At the top of the pass there were a father and a son taking a break, but they didn't know anything about my path. They were peacefully basking in the sun, and didn't have a race to run like me. I envied them. My way up to that point had been through barren meadows with no trees because of the altitude. I followed the path sign into the Valle dei Frati, the Friars' Valley – and the landscape became even harsher. The ground was strewn with large irregular slabs of rusty-coloured porphyry and my going became more difficult, more fatiguing. I kept going at the highest speed the terrain permitted, hopping on the stones, often putting the safety of my ankles at risk when they moved under my sudden landing or when I missed my footing. I was still completely, disquietingly alone. Although the sun was still high and warm, the mountain side to my left was already in the shade because of the low slant of the sun. The end of that valley was closed by a small artificial lake.

I found more signs. An arrow pointed to the right and down to the main valley. I was not too far, I guessed, and I needn't worry anymore, but according to the official time Carona was still two hours away. So the first two elderly people were right after all: it had been a long walk, all things considered, and I had made it much more tiring with this fear of losing my way and being caught somewhere for a long cold night out. If you're alone in the mountains nothing can stop you from worrying. 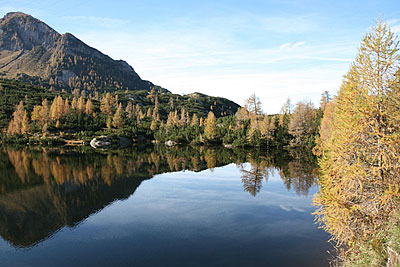 It was however a beautiful hike, of those I hadn't done for a while. The autumn had turned the larches a glowing yellow, and they reflected in the still waters of the lakes – there were quite a few, between natural and artificial ones, on that route. I had enjoyed a little hour in front of the refuge, eating a sandwich and reading a book – my hour of bliss before starting the mad race that lasted until the end. Oddly, I had felt guilty at eating a chocolate bar that had 960 calorie and wondered if I wasn't exceeding my daily requirement, but with hindsight all the haste probably made my energy balance definitely go into the red.