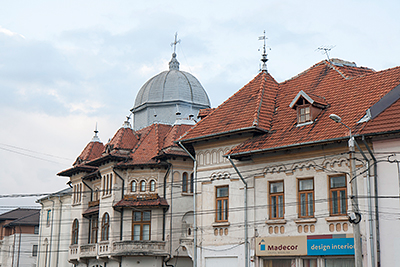 I admit. With only few days at my disposal it would have made more sense to skip Curtea de Argeș altogether: the attractions in town are not mind-blowing, and the fortress ruins lie at a certain distance into the Carpatians. However I had a hotel reservation which I couldn't change, which allowed me to enjoy some surprises.

It was about 5 pm when I entered the monastery grounds. The church was still lit by the twilight. It was a strange building that looked inspired by oriental styles, topped as it was by spiralling turrets and all panelled in light marbles with arabesque decoration. A pavilion preceded the entrance of that church that looked like a mosque made of sugar candy and whipped cream, like a giant wonderland cake. The inside was even more fairy-tale-like: a precinct of square convoluted pillars painted with golden stripes led the gaze up to the dome, from the middle of which hung a circular iron chandelier that matched the smaller ones outside the colonnade. Frescoes covered the walls from bottom to top, and this lighting created an eerie effect on the golds that shone with reflected light over the darker spaces further up the dome.

I returned to the garden and walked towards the town. The black bare branches added an element of decoration to the backdrop of a beautiful dusk. Christmas lights made the tree-lined street look like a ceremonial causeway from the monastery to the town centre. I felt happy to be there. Early the next morning I would hitch-hike to Domnești, then to Câmpulung, and finally take a bus to Brașov.

Cornelio was the very Latin name of the man who picked me up in his car the next morning. He drove his old Dacia as a shuttle between Curtea and Domnești, but had previous work experiences in Hungary, Austria and Italy as a builder. Having been abroad, he felt entitled to criticise Romanian roads, pointing to the potholes and sagging surface here and there. Another couple took me over the remaining 25 km to Câmpulung, dropping me in the centre of town.

It was meant to be just a stopover because I wanted to arrive in Brașov as early as possible. However, while the car edged its way along the busy central street my eye was attracted by a couple of notable buildings, and I decided to have a look. The bus wouldn't leave for another hour, anyway. So I walked back and found one, two, and then plenty of fascinating listed building, all with a descriptive plaque, and I followed a trail that was like an engrossing treasure hunt. Those who watched me walk up to these plaques, read them and take a step back to admire the building, sometimes in a questionable state of repair, may have taken me for a freak, but those private villas were really beautiful.

I came to a monastery. The entrance was through a mighty tower that gave access to a peaceful courtyard. In it a church, the monks' cells, and old well and other buildings. The sun broke temporarily through the clouds that had loomed at the horizon since the morning to quaintly light the beautiful complex.

I got to the market square and pushed the door of the market hall. An orderly display of colourful fruits and jars of pickles in the different stalls stretched from one end to the other of the space. A separate area was for the cheese sellers. The artisan cheeses looked really inviting, and I was tempted to buy some, but then thought of the breakfast I had eaten two hours earlier. Feta cheese, another smoked cheese, butter and the most sugary jams ever... I didn't touch the two sleazy slices of salami and only tried one bit of bacon, leaving the other eight on the side of the plate. Maybe it was time for a more sober diet. 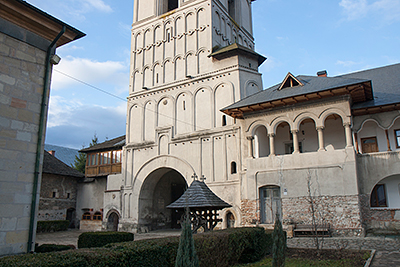 More listed villas were scattered around, and now that I was in the centre it was the turn of official buildings: the town hall, the prefecture, a library, all designed in a grand style that joined tradition with innovation in what was defined as Neo-Romanian. I was intrigued by this wealth of architectural heritage in a provincial town. My bus was long gone by that time, so why not get into the local museum and find answers to my questions?

The display started a bit too early on, with pre-historic items that a nice museum employee was very keen on illustrating to me one by one. When his vocabulary failed, he picked his phone and asked for help, but it was not just instant translation. Five minutes later his mother was on the premises and was kindly explaining all the texts in Romanian. I couldn't find a reference to the architectural flourishing of Câmpulung, but I gained a deep insight into Romanian history.

The cold I suffered in those unheated spaces came as a bonus. By the time I was free to go out the storm had hit the town, it was even colder and was starting to snow. There was only one last bus to Brașov and I jumped in gratefully.