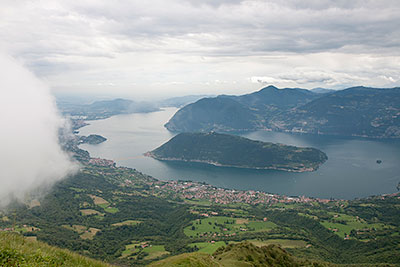 Counting the times I've seen Christo Floating Piers on Lake Iseo in the only 16 days when they were in place, I add up to three. Actually, four – as I was also able to see them from the plane when I was returning from Poland days before the inauguration, although this very first time the piers were not covered yet with the yellow fabric finish.

The total of three includes another sneak preview over the installation without me setting foot on it. On inauguration day, in fact, I joined a great Couchsurfing event and hiked up to the 1,300 m high Punta Almana to enjoy a stunning bird's eye view over the lake. Even if the golden floating footbridge crossing over to the island hadn't been there, the view would have certainly been amazing, as it embraced the entire span of water from one end to the other. The hike was not trivial as it involved climbing a drop of 1,000 m in a short stretch, and we were not blessed with bright weather. We could escape the first downpour by sheltering under a providential roof on the way up, but the second shower was all over our heads and into our clothes. Which may have pleased the Polish girl who was sitting unperturbed on a rock during the first rain under the startled gazes of all the rest. She said it was cooler there.

The second trip was official. I accompanied the Chamber of commerce directors after a board meeting they held at charming Lovere. I wasn't free to enjoy the piers in absolute freedom that time, but it was on this occasion that I prepared the terrain for the third more adventurous going. How? Well, I was able to obtain press passes for my group and, by keeping them, I was able to reuse them on my private visit.

With this load of knowhow, I was pushed by my friends to organise a trip to the Piers on the last week that they stayed open. We set out from Bergamo at 6 pm for what was to be a picnic on Montisola, but once at Rovato the motorway staff informed us that the last shuttle had left at 7 pm. We were just a handful of minutes late.

We then hoped we could drive as near Sulzano as possible, and if we weren't be so lucky as to reach it, maybe we could walk the last stretch on the lake shore and see the piers from there. Otherwise we'd just have the picnic somewhere else on the lake. However, even getting to Iseo looked pretty much impossible. The clogged highway traffic was stopped by several roadblocks that didn't let any cars through, unless you were a resident, had a hotel reservation or... you were an accredited press member, we found out! We waived our press passes through all the successive checkpoints and the doors opened up to us until we were so lucky as to find a roadside parking space, perfectly legal, that was just 500 m from the start of the piers. This was the cherry on the cake – and a detail of no small importance given that the parking fee was around a preposterous € 20.00.

I had thought the press pass would just allow us to avoid the last queue to get onto the footbridge, but without it we wouldn't have been able to even catch a glimpse of it. All in all, it took us 2 and a half hours to get to Sulzano, but at least we made it. With a bag full of pasta salad, Greek salad, bananas, wine and all (usual journalist's equipment, isn't it?) we walked out to Montisola literally floating on the waters in the delightful orange sunset light in the lake environment.

Once on the lake island we found ourselves a quiet spot to sit down and tuck into our provisions, which was on the very parish church steps. Occasional passers-by wished us Buon appetito. Free from the heavier share of our burden, which was by then in our stomach, we walked on to reach the tiny S. Paolo islet and then walked back to our car. Mission accomplished, with a touch of adventure and thrill.