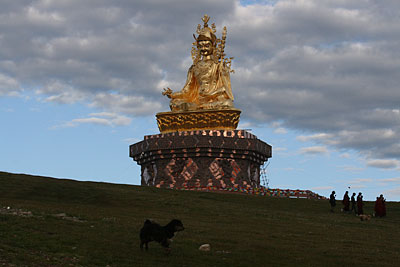 What with the altitude and the nervous tension from yesterday’s adventure, I didn’t have a relaxing sleep, in spite of the comfortable bed. Last night Niong talked about getting up at dawn, and I thought this would be departure time, but actually he meant photography time. So I got up early ready to start, but he turned around saying we could sleep on a little longer as the sun was not up yet.

It was not an easy task to get hold of a vehicle to Baiyu, as all were already chartered and mostly headed to Ganzi. After an hour we found a party of four who were going our way and took us with them. They were nice people from Guangxi on a religious trip touching the Buddhist monasteries in this region.

The drive starts with nothing unusual, that is one more steep road to a high pass, at least followed by a smooth descent on the opposite side. The landscapes are always vast, superb, inspiring. After several hours, we stop at a town that I don’t realise is already our destination Baiyu. Our fellow passengers, who had already fed us with snacks, apples and peanuts, insist to treat us to lunch. Then we resume the drive, but I’m under the delusion we’re still heading to Baiyu.

We skirt a clear mountain stream for some time. All of a sudden I see its blue waters merge in a sea of solid mud which I initially take for a dried up lake. In a matter of seconds, though, I am aware we have now reached the main valley, the one that separates the regions of Sichuan and Tibet. This deep gorge is furrowed by the Jinsha Jian, or Golden Sand Rivers, that in spite of its poetic name, is a rather terrifying sight.

Its waters look menacing as they devour the blue trickle that gets lost in them in a short distance. I can infer how deep they are from their smooth surface that doesn’t reveal the asperities of the river bed. Their colour is so unusual as to be disquieting. Parallel planes of water chase after each other at different speeds as if they were made of incompatible densities, form whirlpools, sometimes rapids, although the flow is too abundant for proper cataracts.

The bumpy road is cut into the cliff at a certain height from the scary river. Although we are moving on the right side, which is the one nearer the mountain, the driver sometimes dodges big potholes by taking an outward course pointing directly to the river, only to swerve back in at the last minute. I can judge my nervousness by the sweaty hands I get while I’m haunted by the thought of this gulf of slimy waters. But I’m not the only one to feel uneasy, as a silence has dropped over the company that was merry and joking only up to a short time ago. Finally the man at the front breaks the ice with the unhappy remark that this road is indeed highly dangerous. 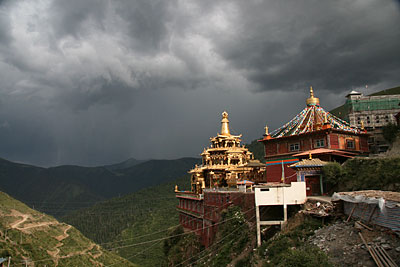 At one point the valley closes in to form an impressive gully where the rocky walls fall directly into the water and the road is obliged to climb up to a certain height to overcome the obstacle. After an interminable hour, during which my only dream is to be walking on my own two feet, we drive off into a side valley, only to start a steep climb on very narrow curves. The man intones Om mane padme hum and keeps chanting for a long time, I can’t understand if it’s in gratitude for being still alive or inspired by the approach of the holy place.

We reach Kathok monastery with its shiny gilt temple silhouetted against a stormy sky. It’s perched on the mountain side with colourful monks’ cabins reaching up to the high slopes. It’s a wonderful place, all surrounded by woods and high mountains.

Until yesterday the monastery was full of visitors who came for a festival, but luckily only the monks are left now. We get an overpriced bed at the pilgrims’ guesthouse. For the bathroom we need to use the temple facilities, i.e. a concrete platform with no water. When I go there, I find young monks joking and talking over the low partitions while squatting on the slots about 15 m above the valley.

The place looks somewhat insalubrious with its mixture of living quarters, litter and human waste, but it’s definitely magic, especially when the moon shines over the valley behind a halo of mist.