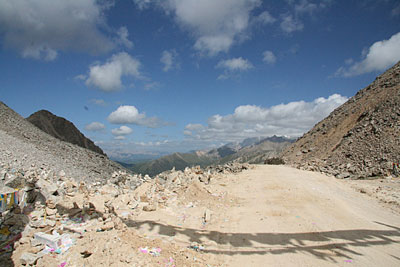 The minibus to Dege leaves around 9, much earlier than the regular bus coming from Ganzi. The driver is a careful one at last, and all his skill is needed because this is the most treacherous leg across the notorious Chola pass at a hefty . This passage is needed to surmount the bastions of rock rising at the head of the valley, where the mountain range that has bordered this marvellous scenic route since Ganzi closes in and forms an insurmountable barrier. After the glacier and the enchanting alpine panoramas, the stern line of craggy peaks with summits as pointed as the teeth of a saw continues along our left hand side.

The approach to the pass is rather painless. With just over a couple of bends and long straight stretches, the road gains height and it soon reaches the formidable elevation. At the pass we honour the Buddhist ritual that provides for a short stop during which the Malay Chinese traveller in the bus tosses bunches of prayer leaflets in the air. He’d been turning a finger in each of them while keeping the wad in the palm of his other hand so as to give them the shape of a rose.

Crossing to the opposite side opens up a panoramic view that leaves me breathless. The road itself is an extraordinary human artefact as it worms its way between several crags of rock on either side, left over after digging the passage of the carriageway. We have another halt and from the verge of the rough road I look down into the void to catch glimpse of a vertiginous drop and a maze of curves cut into the mountain side. Only these will enable us to make a gradual descent to the valley bottom well below. I am mesmerised by this awe-inspiring spectacle of silence and peace.

In Dege I find a nice hotel where a team of geologists from is also staying. They are surveying some sites to prospect for mining exploitation. The town is really interesting, and I have the feeling of having reached an outpost. Dege lies virtually at the far end of Sichuan, which may not mean a lot in practical terms, because beyond it’s still China with the autonomous province of Tibet; but the fact is, I’ll start winding my way back from here, so it takes on the symbolic meaning of frontier town.

I enter the main hall of a large temple, walking barefoot on the dark planks of the wooden floor. Silk satin tapestries hang from the ceiling, like hollow columns of colours that fail to reach the ground by virtue of their aerial structure meant to lift the spirit to higher levels of understanding. The luminosity that falls from the windows above shapes the space into an intricate pattern of shades and lights. On the back remarkable wall paintings depict the atrocious retributions imposed on damned souls and the dreadful aspects of life that make one’s own lot much more bearable in comparison with the risk of incurring them. Nevertheless, the orgy of colours communicates a sense of joy that coexists side to side with the former terrifying messages. 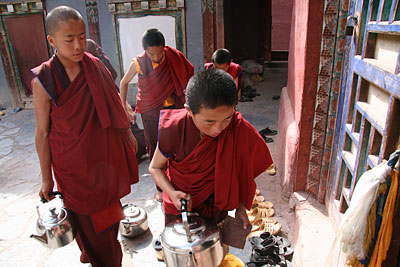 In a nearby building the monks are holding their afternoon prayer sitting on cushions in orderly rows while the abbot dominates all from his raised pulpit. Children monks come in with teapots to serve each of their elder brethren a cup of butter tea. They briskly move down the aisles pouring the fat-smelling liquid.

In the evening I’ve agreed to have dinner with three travellers, quite probably representing the majority of the foreigners in town. As I walk to the appointment, I feel slightly intolerant at the idea of being caught in the closed circle of travel companions. Until yesterday mine was the thrill of living a very original experience, in the company of a Chinese eccentric and with only locals around.

It was out of civility that I condescended to this change of pattern, but also out of a conviction that grumpiness is harmful to my very self. The trespassing of the well-known world I have left behind at home into this bubble of oriental otherness I have blown around myself here will justly remind me who I am and where I come from.

While I grab with my chopsticks a piece of curdled pork blood that I’ve ventured to try, I find it very weird that I should have felt loneliness by the lake yesterday and now I was about to reject company.  I wisely conclude that being with these nice people will not be an attempt on my independence nor will it impose a mediation between myself and the country I’m visiting.