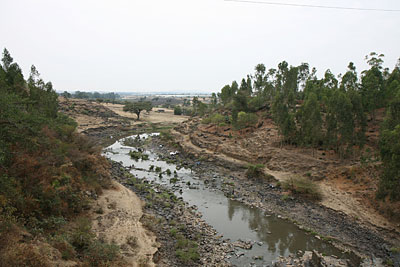 As seen from the perspective of an outsider, Melka Awash can hardly be defined a town. Compared to other villages it has more houses and shops clustered along the high street, but the low buildings, mainly made of a skeleton of eucalyptus timber daubed with adobe, naturally merge with the landscape of tilled fields. In the afternoon the road that crosses through it sees the sporadic passage of vehicles, letting town life flow at an undisturbed pace. Just outside, a bridge over the Awash river spans the gorge. Built by the Italians, who in the late 1930's had the vast country criss-crossed by a network of nearly 5000 km of national roads, it was recently remade by a Chinese company according to the original design.

A little over the bridge is the Melka Kunture archaeological site. I started from the museum, hosted in four huts describing as many aspect of the natural context – fascinating topics that I would have been delighted to know more about had the approach been slightly less scholarly and the print a tad bigger and better lit.

After this disappointing introduction, I moved on to visit the site. An Italian group was walking towards the square pitch of stones under a dais, and I overheard a remark about that being a prehistoric butchery site. I initially thought it was a joke, but then the members of that party led by a very knowledgeable local guide set about sharpening their eyesight to spot hippopotamus vertebrae and pointed tools supposedly used to dissect the slaughtered animal. I realised it was no prank, but I soon gave up the pretension of finding an explanation to every insignificant stone in the heap. My conclusion was that in spite of 50 years of excavations on the site by international missions, the findings were to ordinary mortals nothing that might arouse interest, let alone fill with amazement.

Time to move on: a lorry driver took me in the cabin and dropped me at Tiya, on its way to a quarry from where it would take a load of sand back to Addis Ababa. After dropping me, the friendly man wanted to give me a sim card, but couldn't find it in his wallet. If the driver was disappointed, Tiya too was hardly able to pick up my morals. Originated as a burial site with a number of stelae of different shapes and decorative patterns, it marks a stage in the country's history approximately 700 years ago when Christianity had not yet taken over pagan religions in the south. I had imagined a vast number of stelae, but there was only a limited number. The Italian group in their big 4X4's arrived just as I was about to leave, and I got dusted over while standing on the road side waiting for a minibus. 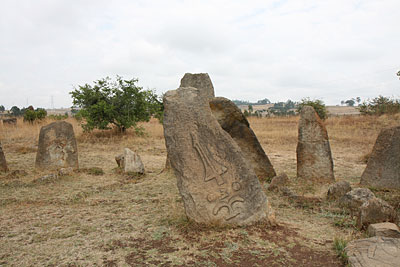 There was a spell of heavy rain on the way to Butajira that in due time hit the town. I took shelter in a Muslim restaurant, ordered the most expensive dish from the Amharic menu and got a platter of injera with a bowl of raw meat. Kitfo is a much valued dish that I was definitely going to try some time, but maybe not right then with no preparation. I reluctantly pinched a lump of soft meat with a piece of torn injera. That was just what any doctor would recommend to stay away from, I mused. The meat was tepid and sweetish in taste, as if it came from a recently killed animal, but I had to admit it was delicious. It was only too abundant, and I had to leave a part behind. I capped it with a coffee, which in Ethiopia is often able to maintain the marvellous smell of toasted beans.

To make up for last night's dreary accommodation I chose to stay at the hotel where African UN officials put up – not a starred hotel, but a great room anyway.