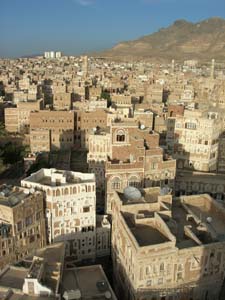 10 April – I’ve just arrived in Sanaa. I’ve taken two buses from the airport to get to Tahrir, the capital city’s central square. I have 2 hours’ delay on the schedule. I look for a phone shop and ring Geraldine up, the friend I met 3 years ago when we were cotenants in a dear old house in the Bab Tuma district of Damascus. She tells me to move towards the 25 September Street and while I’m walking a taxi accosts me at some speed. Suddenly the back door opens and a broad smile followed by loud outburst of mirth gives me the most friendly welcome, a gust of warmth in this cool cloudy day, that sees me tired after much nighttime travelling and of course disoriented for having just landed in an unfamiliar place.

We reach the pretty flat she has rented, where she’s been living for nearly two years, but only for a few months more. She has been carrying out and is now finalising a study on contemporary Yemeni literature. While having some food sitting on the cushions on the mafraj floor, the sitting room of Yemeni houses, the room with a view, we talked profusely, 3 hours I think. We had so much to tell, to remember. Then she plays a tape with lute music and sung lyrics, I lie down on these mattresses for a sweet nap.

Towards the evening we went out to get the travel permit for tomorrow’s trip from the Tourist Police. We are given two sheets of paper without mention of our personal data, not even our names. This seems such a pointless formality, but if they are happy with it… We have dinner in a popular restaurant on a street where people from the South usually gather. We are served an earthenware pot of beans still simmering, ready-baked flat bread you are supposed to pinch the food with to take it to your mouth, and slightly spiced milk tea. We walk across the old town, with night lights that turn the splendid houses into a fairy land. With only watching the shape of the city, I realise this is a country with an Arab soul, but different from what I have come across until now: a proud self, typical culture, special architecture.

We get everything ready for tomorrow’s start to Wadi Hadhramawt. I will be in the company of Geraldine and a friend of hers for a few days. Then they will let me continue the tour by myself, while they will go back to Sanaa. 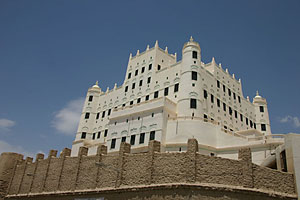 11 April – Our departure is arranged to be by the 2.30 pm bus. I go out for a walk in town in the late morning, then meet Geraldine at Bab al-Yemen. We have lunch at the market, then meet Adnan. He’s a native of Tarim, but now lives in Sanaa, even if his triplet 8-year-old children, whose birth unfortunately brought about their mother’s death, are in Aden with his parents. He lived in that port city during his youth and talk enthusiastically about it.

In the bus Adnan takes out the qat bag that he’s bought and starts chewing the leaves after offering me some. They are the leaves of a shrub whose stimulating effect is sought by most Yemenis on a daily basis. I take a handful with some fear, bite on the leaves and start storing them between the cheek and the teeth. Slowly the leaves pile up and form the typical bulge that in some cases grows to look like a ball in the mouth, very swollen and protuberant. I can taste the herb, then feel intense thirst that makes me drink continually with a parched mouth. However I don’t notice any other effect.

We get to Marib, where the sky is dark with clouds and the air yellow due to a sand storm in progress. After munching for two hours, the leaves are down to tiny bits and I have the impression I’m swallowing some: I need to get rid of them, so take advantage of the stop to spit out.

We get to Sayun and find a hotel. Geraldine makes use of her unbelievable bargaining ability to obtain a price I’d never have hoped for. There is nothing to eat because of the late hour and we have to make do with a bottled fruit juice.

12 April – We wake up a bit late and walk to the centre. I notice two young women in a shop wearing colourful and airy saris, rather than the black robe and a covered face. Usually women live within the house walls here and if thy ever go out they are entirely covered in black, except sometimes a slit for the eyes. I ask them if they are tourists, but they reply they are from the Indian state of Kerala, immigrant workers in a local hospital. I am surprised at this phenomenon of migration that is not an isolate case by the way. There are many Pilipino and Ethiopian office staff in the services sector.

We sit down at a coffee shop opposite the palace. Adnan jokes with some customers and says that Geraldine and I are of Hadhrami descent, grown up overseas and have come to trace our origins. The people don’t know what to think – believe him or not? – there are contrasting opinions and an animated discussion ensues that gives rise to an open verbal contest between Adnan and a man: they take a fierce posture, swell their chests and in a loud enough voice for everyone to hear, but without rage, they call each other’s lineage and forefathers eloquent names, nearly in a poetic style, while everyone looks on with curiosity. It is as if I were watching a Medieval strife without weapons. Adnan comes out victorious and the other walks away crest-fallen. 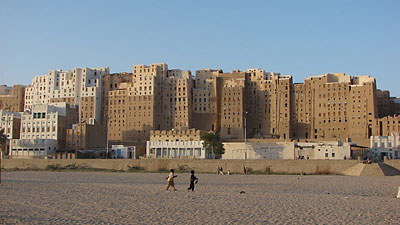 We cross the street to the palace opposite. Once more and without me being able to come around, Geraldine manages to coax the ticket office clerk into letting us in with no ticket. It’s just unbelievable how she can be so convincing and resolute!

The palace is an immense building of a light colour and crayon hues, whose bulk shines in the glittering air of the wide fertile wadi. Its style, as we shall see in further examples, is peculiar, a mixture of different Asian, European and colonial influences. These are the traces left by the opulent Hadhrami merchants and businessmen that set up concerns in the Far East, Indonesia and Singapore and became rich by trading between the continents.

We take a taxi to Shibam, the gorgeous compact city made up of very tall buildings of mud bricks. It looks like an ancient man-made forest of tall trees, in perfect harmony with the natural environment that hosts it for the materials and the hues it is built of. We admire the inhabited nucleus by strolling inside, then opposite from a knoll that lets us appraise it with all its front of houses.

We’re off to visit Qatn and we have a snack here because Adnan has already put up too much with us tampering with his precise habits and is hungry. 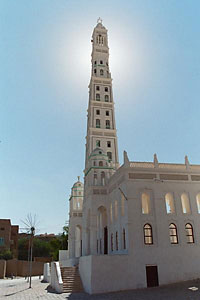 13 April – We shall go to Tarim today, Adnan’s birthplace, but before that we shall go to the barber’s, because it’s Friday and Adnan says it’s sunna, in the Prophet’s tradition to do so.

He often spins yarns of spirits, jinns, magic numbers, miraculous natural remedies. His family belongs to the local aristocracy of the sada, the descendants of the Prophet, historically tied to Sufism and Exotericism. When he tells us these things, he doesn’t seem to be touched by a shade of doubt, but Geraldine and I often exchange a mischievous look and burst out in friendly laughter. He keeps a stiff upper lip: it’s hard to tell whether he accepts a disillusioned point of view on his absolute certainties with an open mind; or he pities us because we are poor infidels; or on the contrary he just keeps quiet out of politeness. Sometimes though, when he’s about to tell one of his tales, I have noticed a slight ironic crease on his lips, and I suspect he’s slyly playing the game.

Certainly Geraldine always speaks her mind, says and does whatever comes into her head to turn into a show on all occasions, especially in her relationship with men who are not used to dealing with such a nonchalant and uninhibited woman. She makes the most of this surprise effect, her persuasive power and the subtlety of the Arab world. She is at ease in almost all situations.

I saw her however slightly embarrassed today when we went to look up Adnan’s cousin. We were introduced into a bare living-room, a big room with no furniture, no cushions, only a light-coloured carpet on the floor and the grandfather’s picture hanging on the wall, the same one we’d seen in Adnan’s birth house. This essential decoration reveals the austere spirit, some say thrifty, of these people. He offers us tea, but the two relatives, who haven’t seen each other for two years, only exchange a few courteous words, maybe somewhat stilted. We may be the ones to cause some embarrassment. I suppose the cousin doesn’t know well what to think of Adnan, who is in the company of a Western girl, who in turn goes around with two male friends in all freedom and as if nothing were happening, and no wedlock with either.

Of course Adnan wants to meet his aunt, who used to live with him when he was little. I have no right to see her, though, being a male stranger. While she meets her nephew, they get me to see the splendid view from the roof of the huge tall building. I go up two or three storeys, walking barefoot up the steps of dusty stairs and catching glimpse of unused rooms locked since ages. Meanwhile the aunt meets her nephew and Geraldine, and when the cousin takes me back down, she has vanished.

Tarim is an international Islamic teaching centre. There are students of religious sciences from all over the world, mainly from Asia, Indonesia and Malaysia. We realised that much last night when we took a minibus full of men going to a mulid, the celebration ceremony for the Prophet’s birth in the lunar month of Rabie al-awwal. All were dressed in white and joined the crowd already teeming on the floodlit esplanade in the night. A raucous and screeching voice, also because of bad amplification, was chanting himns and leading the celebration. Here again not a single woman to be seen in the open air, the only few ones entirely veiled following the rite from inside the parked cars on the margin of the lot. The stares of several men were as many eloquent invitations for Geraldine to leave.

And so we did promptly, anticipating an enjoyable swim in the hotel pool like last night, with flying foxes fluttering in the air and sometimes skirting the water. But at the hotel we find the pool empty for cleaning. The Hell breaks loose! Geraldine doesn’t spare a long, joking, but insistent tirade to the owners and declares herself ready to clean it personally to be able to use it on the spot!

I went around some hotels tonight in search of a group of tourists to join in order to visit remoter branches of the wadi tomorrow, but didn’t find any. That means that from tomorrow I will get by with whatever means I will find.