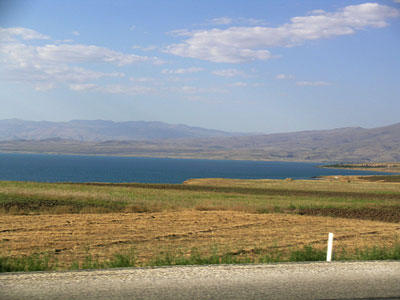 6 August - Last night Dominic self-complacently told me about the feats he has carried out: overnighting in his sleeping-bag on the pyramid of pebbles on top of Nemrut Dagi (which is obviously forbidden to climb) and some years ago clamber up Cheops' pyramid in Giza. I remarked he is more megalomaniac that the king Antioch who had the Nemrut built!

We left to the bus sop and drank a tea chatting away the hour that we had to wait. We find Hosap castle closed, but while we are thinking out a plan to sneak into the tumbling ramparts we catch sight of a group of tourists that have got the key from the police and are about to get in through the gate. After the visit we walk down to the main road and bump into Mariangiola and Ibrahim, to whom I'd left a note with my plans for the day.

Dominic and I would like to visit another castle on the road back to town, but I don't have much time, given that the bus to Dogubeyazit leaves at 3 pm. We decide to hitchhike, to our bad luck. A lorry pick us up, but after just a few kilometres he turns away from the main road to the left of an artificial lake. We surmise they want to avoid the police and we wonder in curiosity what kind of goods they may be carrying coming from Iran. We embark on a long hour of terribly slow going on a dirt road, full of potholes that make the vehicle trundle on with bad joggles, jolting us as well without break. But what is worse, far worse, is that the three members of the crew don't give us an instant of respite, shouting into our ears, laughing, yelling, joking, pointing us the most trivial things (Look, there a house! a cow! …), obviously in Kurdish.

Dominic speculates that the euphoria must be due to some stimulant. They have told us they are carrying coffee and if it's that they have been drinking, they must have done so well over measure. At a filling station they let on another guy and I notice he behaves in the same way. Now we have four torments on us, besides being obliged to keep absurd postures in the lorry cabin. We drive past the other fortress that we had meant to visit, but the time we have wasted on the smugglers' road, as we have named it, doesn't allow for one minute more, so I determinately snap: Take us to Van! 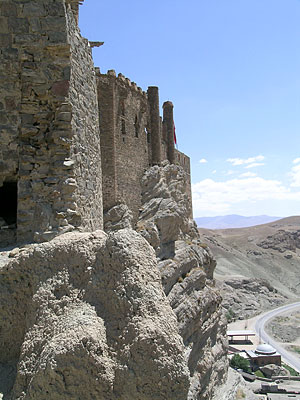 We get there at 2.30 pm after two long hours of suffering. I can hardly stand and feel bewildered, but I am forced to hasten my pace, then even run in order to get the luggage from the hotel.

As a matter of fact, they tell me the bus will be leaving at 4, so I have time to eat some fruit, retrieve my backpack and take leave from Dominic. I am also joined by Mariangiola and Ibrahim who decide to leave with me.

The road winds along the lake, of an unreal light blue, later to connect to the highway leading to the border with Iran, just 35 km away from Dogubeyazit. I observe black lava fields on the slopes of an extinct volcano. Later, towards the end of the journey, I catch a glimpse of the imposing Ararat that grows bigger and bigger and eventually comes in sight clear of the foothills to recover all its majesty. I get off in this frontier town where Iranian products and travellers come and go, maybe even smuggled goods. I am exhausted and drag my weary slow steps along the streets, saddled with my backpack, towards my hotel. I have dinner with Mariangiola and Ibrahim on a terrace overlooking the street, then spend some time reading in the hotel hall. Finally I retire to my room and do the washing in the bucket that I have ferreted out of a closet on my floor.