I’ve already stepped out of my room several times, irresistibly attracted by a compelling music of crickets and other night insects that break the perfect stillness of the night. Sometimes some words come from the telly, but the quietness is otherwise enveloping, as is the darkness.

Lalibela lies among remote mountains a long way off from the major roads that link the main towns. The drive from Mekele took the best part of yesterday, and I started at 5. At that time the bus station was already teeming with people and, as is not unusual in these places, a row broke out over I don’t know what, with people yelling and taking sides if they were not directly concerned. My move took me first to Wulda, and then to Gashena, a scattered village of basic houses on the plateau with lots of new building being erected. They typically consist of beautiful round huts of stones covered by a thatched roof, or a square structure of gum-tree poles daubed with mud. Finally I got a minibus on to my final destination. Today I spent my first extraordinary day in Lalibela. The astounding thing is that its world-famous churches are still used for religious purposes, which makes them living buildings and not museums only for the joy of visitors. They come to life during the heart-felt, mysterious rites performed here every morning, with deacons and priests wearing strange attires, bands playing religious music in the gloomy interior of these rock-hewn masterpieces. I spent four hours wandering about the intricate maze of corridors, passages and tunnels that link the churches from within the heart of the mountain. I bathed in the aura they emanate without rushing and took in the sights as well as the atmosphere, not just the architecture.

Very few tourists broke the spell, but one definitely did. I was watching the performance of a religious hymn accompanied by the drums and rattles that created a mesmerising rhythmic sequence. A woman came in and standing beside me she started swinging to the music, as if she was not in a church listening to sacred music, but at a pop concert in a stadium. Then, thinking she might be even more in tune with the local culture, she started following the music with movements of the hands.

It is here that I came across a few tourist groups and was taken aback at how unnatural many white people look: bellies bloated by binge eating, elderly people aspiring to recover the prime of youth through unbefitting clothes and hair dyed to unlikely hues. We don’t accept the passing of time anymore and we will be choked by our welfare.

In the afternoon the atmosphere was quite different because there were no rites in progress, at least in the second group of churches that I visited. I ended the day with a sneak preview of the most emblematic of Lalibela’s churches, St. George’s. It’s striking building with a cross-shaped plant ending in a flat roof that is level with the plane of rock it was carved into. The roof bears a double deep groove that follows its outline, so that the cross definitely stands out as the leitmotif. St. George’s is also the only church still uncovered by the modern shelters that may be functional to the better conservation of the monuments, but are definitely an eyesore. 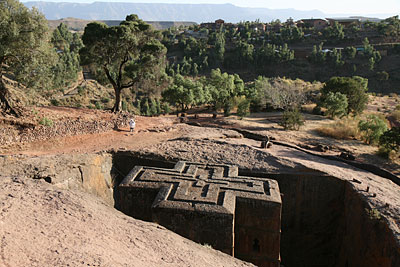 As I was moving between the churches, some children came asking for money, pointing at their torn shoes and an allegedly empty stomach. I sat down with them and had them laugh, feeling for their belly and finding it full and healthy, then asking them for a pen or a birr. I showed a little kid the thorn of a plant and pretended I was having an injection on my arm, then asked him if he wanted to be cured as well. He was scared, so I laughingly chased him around wielding my mock syringe. While we were there joking I was joined by a group of students who wanted to correct some English grammar exercises.

I also spent over an hour with the hotel receptionist. He wanted me to check the business plan for a pharmacy that may be financed by the New Zealand doctor who already supported him through his studies. He had a long list of questions to reply, and we went through them, trying to make sense of the answers he’d already prepared with the help of another tourist. I liked his determination and seriousness.

I spent my second morning with more visits, but my plan to leave in the afternoon was unsuccessful. For all the time I’d given him, the receptionist was not very effective in securing me a bus. I rushed up the long slope laden with my luggage only to find there was no vehicle. I then got myself a room behind the bus station, nauseous because of the exertion. I had no dinner, but just drank cinnamon tea. At least I had a ticket on tomorrow’s bus, leaving, you’ve guessed it, at 6.