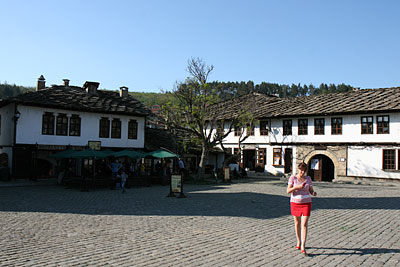 After a visit to the remains of Tsarevets fortress I caught a train to Triavna. I was expectant to meet who promised to be the grumpiest hotel manager in the world. The hostel lady who acted as intermediary on the phone had in fact ended the call with a perplexed expression. She reported the man was not at all keen to take me as a guest because he speaks no English. I could understand his hesitation on that account, but when he threatened that if I turned up later than 7 pm it would not be worth going at all, I wondered whether I had made a good choice.

When I rang the bell a shirtless man opened the door. His hairy chest and bulging belly were not the nicest of sights as a welcome, and I thought this unconventional appearance was in line with his manners on the phone. However, the half naked man turned out to be only another guest, and a helpful one too. He went up to call his girlfriend who had some English and got in touch with the ratty owner. This said he would be back after 6 pm, so my encounter with him was put off till later.

Meanwhile I visited the marvellous accomplishments of the wood carvers in the historical houses of the village, as well as the old street and the square. When I got home in the evening, I found my man tinkering in the backyard. As soon as he saw me, he started talking in Bulgarian as if in order to make up for his inability to speak English he assumed me to be an expert in his language. He did not have any change to my 50 leva banknote, so I said I would go out for dinner and come back with small money.

I do not know if this is what he understood, but at least it was what I tried to get through to him resorting to desperate gestures and exaggerated facial expressions.  Probably the ideas were clear only to because when I got back the house was abandoned. It was only populated by harmless winged insects from the countryside that had got even between the immaculate sheets.

The next day I wanted to reach Koprivshtitsa by train, but I got a bad surprise when I was informed the journey would take four hours and a half. I made a bid for the bus in case it was quicker, but the ticket seller dampened my hopes with a disconsolate “No, no, no!”. I don’t know what was the implication of so much despair, but it convinced me to amble back to the train station and buy the ticket. I think I glimpsed a wicked expression of vengeance on the employee’s face.

I sat in the only empty compartment and read my book until a big woman in uniform flung the door open and yelled that I was occupying her private space. To prove my wrongdoing, she got hold of the official train timetable that was lying on a seat and waved it before my eyes. I was once again expected to be conversant with the Cyrillic script and know the Bulgarian language to have deciphered the title of the book. And above all I was supposed to know that a ticket collector is entitled to a whole 6 seat compartment, even when the train is full.

Rude as she was, at least she took good care of her passengers. She pointed out that I would have to change trains in Karlovo and near the station I was alerted to get off. In the next train I found another dependable collector who said I had to change in another place. After three trains and a shuttle bus ride I eventually reached Koprivshtitsa. 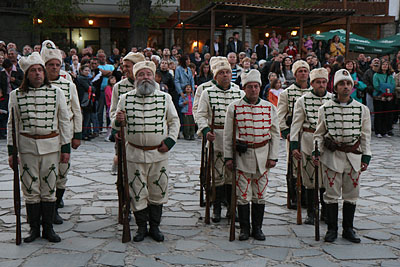 This is a mountainous area. As a rule, owing to a low population density the Bulgarian landscape is wooded and green. The land has not been eaten up yet by an uncontrolled building development although the town outskirts are already a sad testimony to the fact that the process of urban sprawl is well under way. And of course, the Black sea coast is another exception.

Koprivshtitsa is all in a flutter. Visitors are teeming on the street market and the main square is getting ready for a historical re-enactment. In the evening everybody gathers around the monument where they celebrate some anniversary and I join in. I still don’t understand the language, but at least the events explain themselves and all ends in nice fireworks.