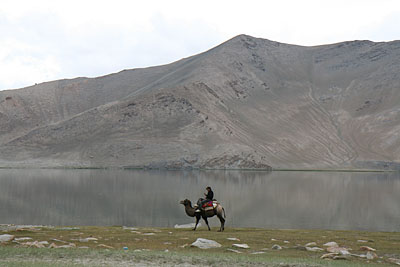 Last night I took a stroll through an exciting night market that made me fall in love with Kashgar at first sight. It was unlike any other Chinese market I had seen so far, full of visitors and stalls offering food ranging from whitish cow’s lungs, to sheep’s heads and more commonplace noodles or watermelon, all under dangling light bulbs. Whether the hype was ordinary or due to the approaching end of Ramadan, I perceived a rocking festive mood and found it electrifying.

The plan, however, was to leave the next morning to Karakul lake and be back by the great Muslim festival on Sunday, when an unheard-of mass of worshippers would gather on the main square and take part in the moning prayer after which all would be free to eat even by daylight.

I met Xiefei because he was my roommate. He was a kind big-eyed fellow who talked and moved calmly. As we were both going to Karakul he proposed we went together. At the bus station we could not get tickets for the same bus, but we met again at the lake. The journey crossed a wonderful valley with impressive mountains. It was their bare rock as much as the vivid red colours that were extraordinary. For a long time the bottom of the valley was a flat expanse of gravel crossed by rivulets. This superb nature was a worthy anticipation of the legendary Karakorum Highway to Pakistan, of which this is the first leg. 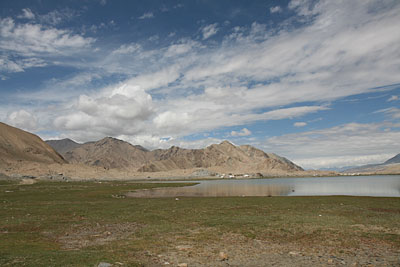 We got to an artificial lake closed in by mountains that look like white sand dunes crossed by light streaks of black. This high altitude landscape was outlandish, but this was not yet Karakul. Further on, we reached the natural lake encompassed by high peaks reflecting in the still water. It was not at its best because the clouds hid the mountains, but when they were occasionally swept away by the wind, there they stood, covered in snow and towering majestically against a blue sky.

A few Chinese students also came to the lake as independent tourists. We all lodged in the various Kazakh yurts scattered along the shore. We gathered in the evening and had tea together. Later I met my real tent companions, an English and a US couple. After a bowl of soup, we realised that rain had set in and the night was getting colder and colder. I kept myself warm crushed by the overwhelming weight of the quilts. Only my nose tip became icy.