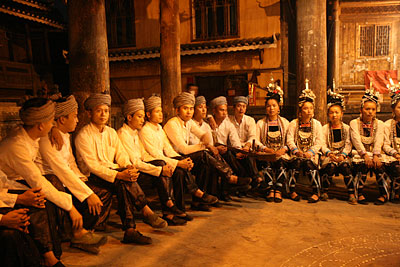 When I wanted to leave Basha I looked for a lift and was let on board a van with a jolly group people who invited me to join their tour. They all came from different places, , and Shenzhen (and now I was the international member), and had chartered the vehicle together. We all very cheerfully made our way to Xiaohuang where we stayed for the night.

Along the road a bullfight was taking place. The driver didn’t want to stop because he was pressed to be at home for dinner in time, as his mother had instructed. I would have liked to watch because in the Dong bullfight, neither bull actually gets killed but is chased away by the winner. At our village we were nevertheless rewarded by the sight of the champion of another fight. The awe-inspiring beast was proudly standing next to the drum tower and was the object of everybody’s admiration. Its owner patted it while certainly gloating over the big cash prize it had earned him. I was warned not to wave my red backpack in front of his eyes.

After a delicious dinner that can only enjoyed in when you are with a group of people, we were invited to see a local folklore show on the square. Before they started the performance, the locals, smartly dressed in their traditional costume, asked who wanted to sing a song from their land of origin. Everybody’s eyes instantly turned on me, the only alien in that sparse group of tourists, and I could not flinch from the duty. I sang an Italian pop song from the 60’s that a Chinese friend had once liked and I thought it might meet their taste. It was a success. But the best part was of course the Dong girls and boys’ singing and acting performance that entertained us well into the full moon night.

The next day we moved to another village with five drum towers emerging from the mist and wooden buildings erected without using nails. Then our group dispersed in different directions. I went back to Kaili where my landlady and my rucksack where patiently waiting for my return.

I went to Langde, with hardly any energy because of the build-up of intense physical activity in the last days, but loved the village so much that I decided to spend my last night there. The lower village is pretty enough but the tranquil upper part is decidedly idyllic. The temperature was hot and I bathed in a pool of the river. Some girls called me from under the bridge and asked me to join their barbecue. With hindsight I was glad I didn’t, because on the bus back to town they were so dead drunk that they couldn’t even hold things in their hands, screamed frantically and in the end vomited from the window. 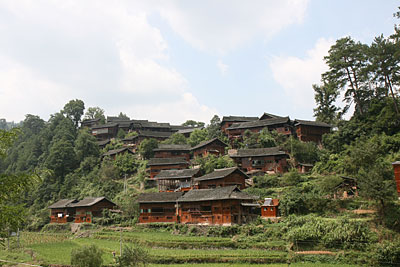 I walked along the valley, gaining elevation over the watercourse. If I had had the time, I fancied, I would trek up as far as the path took me, in spite of the fatigue I was feeling because now enthusiasm was again the stronger. I crossed a couple of peasants leading a donkey. Surprised as they looked to see a laowai on that mountain path, their smile expressed warm-heartedness and hospitality. I would miss the Dong, and the Miao, and the Buyi, now that I was about to leave , and .

Back amontg the Han, I enjoyed the night market in Kaili, the night scene in , but my time in was over. Despite all my misgivings this had been a memorable trip, one that might even make me want to come back again.