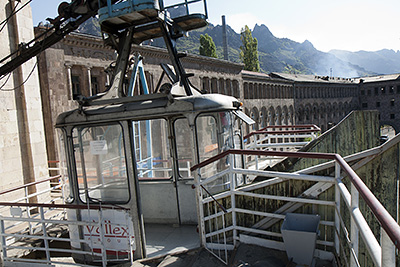 The valley of Alaverdi is a crucial way of communication between Armenia and Georgia, crossed by a highway and a railway, and marked by the presence of a huge mining plant. Industrial structures and chimneystacks are found near the river, some of which look abandoned. A rocky crag up in the mountains gives out a flow of white smoke as if the furnace down below was connected to it by an invisible underground vent. From the bottom of the valley you can reach the bigger part of Alaverdi perched on a slightly sloping ledge by means of an old cableway that travels exasperatingly slow because of security concerns after the plant suffered a breakdown time ago. Very encouraging.

The two French girls and I passed under a gridlock of cables and wires overhead before we entered the cableway station. When we were in mid-air one of the girls leaned on a door and realised to everybody's dismay that it was sliding open because it was not locked. At the upper station we were allowed to get into the engine room and the control booth, where an elderly woman supervised the working of the obsolete system.

From there it was only a short walk out of the workers' tenements to Sanahin monastery. The dark church was preceded by a porch and consisted of a vast hall with disjointed tombstone slabs for a floor. Mysterious symbols were carved on the pillars and lintels. The place was tremendously inspiring, quiet, and medieval. A black-clad woman was sweeping the floor outside, no other visitors. In all this wonderful peace a notice inconsistently advertised free wi-fi within the precinct of the forgotten Unesco site.

In the afternoon I went to Haghpat, from where the gaze stretches over both ledges at mid height at both sides of the valley. A set of churches and various buildings are scattered over a patch of grassy ground. To me it was perhaps artistically more interesting, but lacked the atmosphere that I had felt so intensely in Sanahin.

At night we had a grill evening with the other guests in the garden. The next night was in Spitak, rebuilt after the utter destruction in the 1988 earthquake, and then Guiumri market: a stroll through stands selling coffee, vegetable, pickles, jelly-robed walnuts, dried apricots, blackberries, dried herbs, watermelons. Some sellers insisted I sit down and have a cucumber, tomato, some cheese... Further on I was invited to drink vodka. It was the last thing I felt like having in that heat but there was no way of saying no.

The last days in Yerevan took me to Khor Virap, that, being in the Ararat plain, was particularly hot. From there the cone of the Ararat was outlined just across the border. Then Garni and Geghard, which I visited in the company of a diplomat working in Paris who I met at the hostel dorm (I had to update my preconceived ideas about diplomats). The beautiful valley was impressive and even more the wall of octagonal basalt columns. In Geghard, again, the church interior gave me strong feelings through its powerful reliefs. 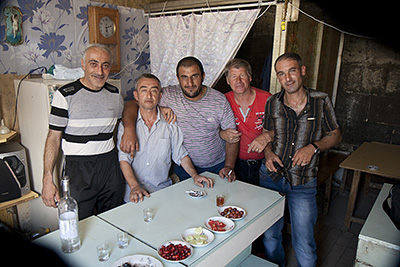 In Yerevan I had a bout of tummy ache and wanted to go the chemist's to buy some medicines, but when you can't make yourself understood with words, I realised there are things you just can't mime with gestures or sounds. I came out of the pharmacy empty-handed and giggling. I texted the French girls about that, and they were doubled up with laughter because they'd gone through the same thing. We met for a last farewell dinner and one of them had just come out of a hospital casualties after tripping over in a restaurant and chipping a rib. To round it off we enjoyed a grand show of sound and light at the fountain in the central square.