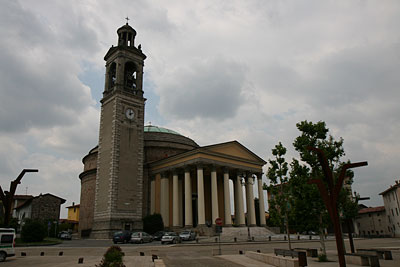 On Saturday I was driven out of town by the desire to follow a certain route in the plain. I was not only aiming at taking some exercise on my bike, but I was also going in pursuit of a fancy. In fact I’ve been collecting theme photographs for some time, and one of these concerns buildings and art dating from the 1930’s (gallery). As I’d learned that Fontanella town hall was designed by architect Elziro Bergonzo, active in that period, I set that as my goal.

I drove to Malpaga in order to avoid the traffic and the unpleasant town outskirts. There stands a beautiful castle that belonged to the famous condottiere Bartolomeo Colleoni. The embattled structure is surrounded by a typical Bergamask farmhouse with a central courtyard called aia that hides most of the castle from the outside. The farm must have housed in its best times tens of sharecrop farmers, but now it is an empty container.

From Malpaga it’s only two kilometres to Ghisalba, my grandparent’s place of residence. It was here that my grandma, who had been sent to teach at the local primary school, met my grandpa in the early 1940’s. They got married in 1943 at the height of WW2 and went on one day’s honeymoon to Lago Iseo. Knowing they were newly wed, the landlord gave them a special treat for dinner. He complained he had only potatoes to give them, but he had tucked a slice of precious meat for each under a lump of mash.

The house that they lived in until they moved to the town in the 1960’s is no more, but I remember it very well. The units that gave onto the courtyard were leased to farmers, who had space to keep their machines and animals, while my grandparents lived in a wing facing the outside. The council bought the whole lot some time ago and pulled it down, which is a sad thing not just because much of the family’s history was related to that place, but also because it constituted part of the border between the ancient core of the village and the newly developed areas. Now there is an empty hole, like a missing tooth in an otherwise beautiful smile.

Ghisalba has a stunning neoclassical church, a copy of Rome’s Pantheon, that towers on one end of the village. But more interesting still is the town of Martinengo, my grandfather’s birthplace. Its buildings are impregnated with history and the moat around the old part testifies to its long history. It was home to exponents of the landed gentry, before the post-war economic boom resulted in the emancipation of poor farmers and a democratisation of society. 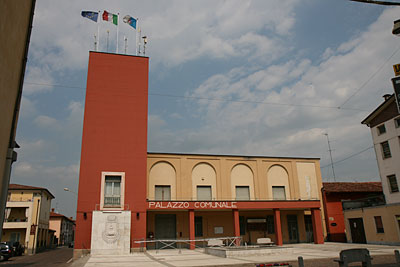 Between Martinengo and Romano it’s another 5 kilometres on a narrow road that didn’t leave my heart at ease. Two lorries whizzing past me caused an air blast that swayed me. If I didn’t turn about it was only because I had already cycled half the distance and the return would have been on the same damn road.

Romano was also a pleasant surprise. It boasts two museums and an interesting centre, plus a brick castle. I pushed further to Fontanella to finally find the town hall I set out for. It is a rationalistic building of a recent epoch that I found interesting per se but much more because it had given me the chance to open my mind to the rich towns I had rediscovered on my way.