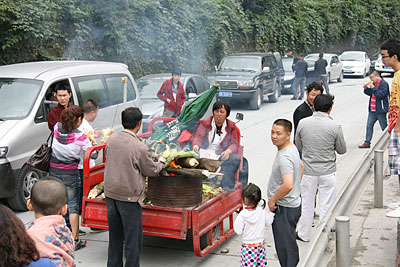 Getting to Kangding was a trial of 10 and a half hours, as opposed to the stated 8 hour standard time. The bus was held up three times for long hours, with the rest of the traffic, because of massive roadworks. The last stop, that intervened when the bus had already picked up some speed and made me hope the delay could be partly offset, preceded tens of kilometres of a gigantic upheaval in the landscape, due to the building of a dam. What had looked like fairly idyllic landscape until then, was soon turned into havoc and destruction.

I expect the residents not to be very keen on the scheme, but they can’t have enjoyed the privilege to speak up. Soon the low lying areas will be flooded and with the completion of the project the only temporary advantage for them will disappear too as there won’t be any more detained vehicles to sell beverages and snacks to. But for the time being, at least, motor carts quickly rush to the traffic jam with burning logs on their back to sell grilled ears of corn.

Down in the valley the humidity from the woods poetically condenses into streaks of vapour materialised from nothingness. They drift lazily, form slow-motion whirlwinds and drift up to skirt the fir-covered slopes, letting the dark branches emerge here and there, enveloping the mountain tops completely. 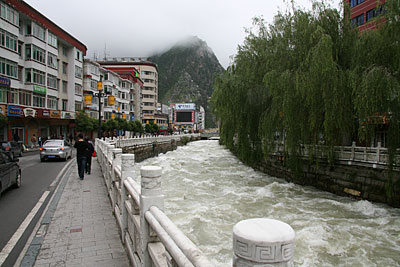 At 10 pm I am finally in Kangding, somewhat confused. I can’t see much from the car that takes me into town in the rainy weather. I have to wait the next morning to see a town of mixed identity: there are concrete buildings several storeys high and the hideous bombastic style of Chinese architecture that touches its lowest level in public buildings. Next to this, there appear the first signs of Tibetan culture, with writings in the beautiful script that has long curved stems to certain letters going way up and down the line.

Two streams meet here, the first being a tumultuous watercourse that looks as if it were made of boiling water jumping on the rough bed in its breakneck descent from the heights; the second much calmer because not so rich in water and coming from a less steep valley.

The continuation of my itinerary along the Sichuan-Tibet highway is in jeopardy. Rumour has it that only yesterday a tourist was denied a ticket to Litang, where I propose to go.