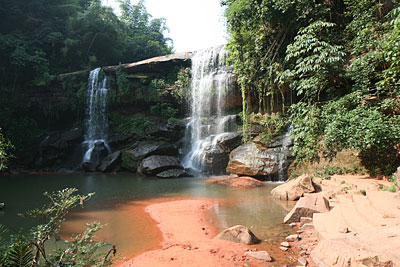 During those days in Chishui I sort of followed a routinely life: by daytime I went to some attraction in the countryside and by the evening I made it back “home”. Home was the guesthouse I was staying at, where, probably on account of being the first foreigner putting up in the history of the establishment, I was treated in a particularly friendly way by the boss and his charming employee. Then I had my family, which was the restaurant where I went for dinner. The two warm-hearted young people who ran it showed so much eagerness to establish a friendship that it was like we’d been friends forever.

Whenever the flow of punters permitted, they came over to my table to talk and after a certain hour we were free to chatter away the rest of the night. In two shakes of a lamb’s tail my eyelids felt heavy and it was already One day I came back to the hotel so late that I found the door locked. Ringing the bell was no use, so I had to ask the off-licence shopkeeper downstairs to give the hotel girl a call and have the door opened for me.

One of the most beautiful places around Chishui was the . To go there the bus followed the river, then took a turning into the hilly countryside. I stood at the entrance around half past nine, and the air was beginning to become hot. However, as soon as I went into the thick forest, I felt the instant effect of the shade.

The valley was enchanting, and featured a stream that flowed down five consecutive drops forming as many beautiful waterfalls. Nothing huge, but each one was a quaint scene with a different setup. At every stage the waterfall and the surrounding vegetation seemed a perfectly designed landscape, but it was only the work of nature. Human intervention was limited to preservation and maintenance, for the rest it was nature let grow into luxuriance in the humid environment. 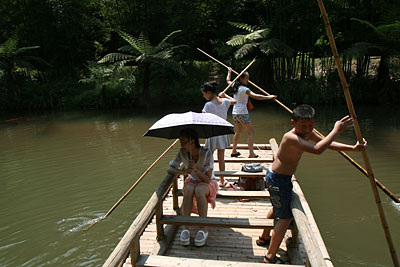 The escalation of scenes continued until I arrived in sight of the final one, the most beautiful of all. I stood within reach of the spray admiring the colours of the reddish sands covered by varying depths of greenish waters.  Four teenagers came up and addressed me. They had been curious  about the laowai, or foreigner, for a while as we had been walking up the path, and the rather unruly boy of 10 had tried to attract my attention in a mocking way. They offered me some fruit and we got into talking. They ended up inviting me for lunch and in turn I invited them to a boating session. After punting on the river, we were all more drenched in sweat than in water. I wished I could get walk downright under the waterfall, but had to wait for a good shower at the hotel to wash away all the tiredness.

I like the way the Chinese use the verb “play” to mean visit, enjoy a place, spend time together. For example, in order to know about the attractions of a place, you may do an internet search using the keywords "How to play in Chishui”. Its use is not restricted to children and may reflect the lightness of the Chinese temperament. Well, today, I definitely “played” in the , enjoying nature as well as company in a Chinese-style natural park.