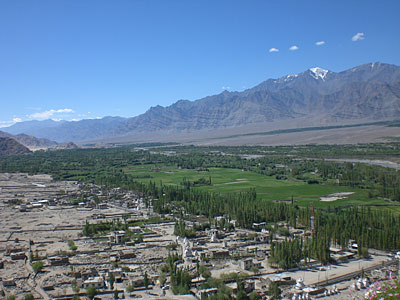 At 9 arrives the bus to Leh. We soon reach the Indus valley and the highway extends on the high ledges of alluvial debris in the bottom of the valley where the river has dug its course. The banks are so steep, high and prone to landslides, that I think the look of these places will change a lot in a short time, although the scarcity of rainfall is not speeding the process.

I arrive in Leh at 2 pm. I get into town and try to find my way in what looks like a big village with a Lhasa Potala-like palace looming over it. The central modern streets, though, reveal a massive presence of tourists with plenty of shops, all selling the same trite goods, among which Rajasthani materials.

I find a guesthouse in the old town. The room and above all the bathroom are nothing to write home about, but the location, the view on the Royal Palace, its very old building with a courtyard and a wooden staircase painted in lacquer red compensate for the drawbacks.

10 August - I get up early to climb up the mountain and see the puja in the monastery placed on the highest summit above the Royal Palace. As a matter of fact I find it abandoned, so I go down a little to enter another monastery where an only monk performs the prayer shrouded in a dense pungent smoke whose coils dance in the air, pierced by the sun-rays still aslant from a gap in the roof, before attaining their freedom as they sneak out of the entrance door. 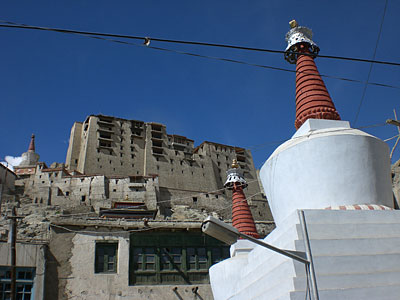 It's now time I gave my mind to practical details. In the first place I must have a sandal fixed that has come unsewn and I choose a street cobbler. He has a blanket spread on the ground for a worktop; over it are scattered his few tools: polishes, pigments, brushes. As he works, he tells me he's from Jaipur and since 1998 he's spent the summer season in Leh. Dispirited, he says he's a father of five who need maintaining. He's the image of India's internal migrations, as were those cooks from Calcutta that I met in Jaisalmer, 37 train hours away.
I start searching for a travel solution to Manali the day after tomorrow. The passage is far from straightforward and has me a little worried for the duration it'll take and the possible setbacks. However, the State bus company only accepts reservations on the day before departure.

I decide not to make any visit to the surroundings today, but to rest. I lie down on my bed exhausted. I must still have a temperature because of that cold that has turned into a cough and also some sinusitis. If paracetamol doesn't do the trick, I must buy some antibiotics tomorrow, before leaving the town, as I won't be likely to find any in Keylong. 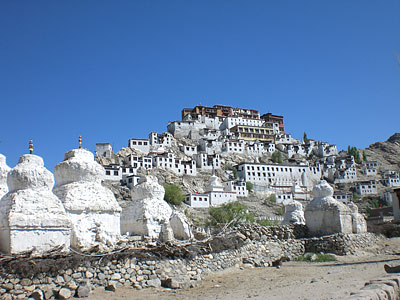 11 August - My first thought today is to get the bloody ticket to Manali on tomorrow's bus, since the time to my flight is getting short and the way is still rather long and hard. After that I go to Tiksey monastery by an hour's ride on a small bus. The sight of the monastery buildings is imposing, as they occupy the whole hill side. I start climbing it following the neat lanes with cement steps. But this slight effort, in my present physical condition, costs me a terrible exhaustion. I repent wanting to move at all this morning. I must still have a temperature and every ascent feels as if it were impossible, add to this the relentless sun of this region... I determine therefore to visit the interesting things with calm and get ready for another quiet afternoon of rest in my bed, with the nice view on old Leh from the window.

The old library is engrossing, the statues of demons charged with very complex symbols. There is also a big Buddha statue that takes up two storeys of the building and crosses through the floor.

Back to town, I notice an extraordinary number of soldiers everywhere. My talkative Tibetan friend in her stall explains the reason: today the Dalai Lama has been invited by the Muslim authorities who are about to complete the building of a new mosque at 300 m from the main one, something that looks to me tantamount to marking the territory.

It was just yesterday, while walking next to the mosque, when I heard a sermon uttered in violent and irate tones. How sharp the contrast with the Buddhist placidity, with the peaceful and eternal reeling of the mani wheels, the flying of flimsy colourful flags in the wind, the secluded monk lifestyle. I also remembered with unease that Muslim guy in Kargil showing off his narrow-minded refusal to enter a Buddhist monastery on principle.

The Ladakhi women are wearing their "Sunday best" today and are adorned with an embroidered stole or the padded Tibetan hat. Many are waiting along the street to acclaim to their spiritual leader, under the fiery sun. I too wait curiously for some time, but then decide that rest is what I need. I am a bit disgusted at the attitude of many improvised paparazzi, tourists aiming their camera to take a shot of a vip. It seems to me vain protagonism founded on the reduction of reality to  superficial images.

I go out only for dinner and brace myself to the early rise for tomorrow's great journey, the Himalayan crossing over the high passes.