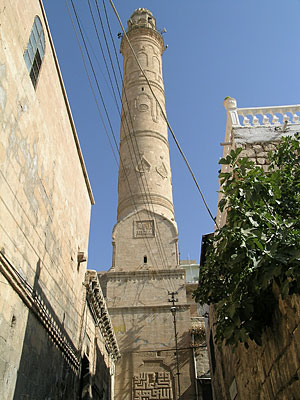 1 August -I'm writing sitting on the terrace of a café in Mardin, a terrace looking out on a marvellous view enhanced by its high position over fields burned by the sun, yellow and ocre, only a little green, stretching towards the nearby border with Syria and beyond into its interior. It's a view and an atmosphere that fill me with euphoria. The hot sun tinges with handsome golden full light this spectacle of nature and architecture sculpted in the stone of various buildings. It's a admirable place. Funnily enough I have got here with a lot of incertitude because I didn't know what accommodation I could choose for the night, given that I had news of three hotels of a higher budget range than my usual. But I was lucky to find a rather run-down place where, just about to have a shower, I started to fill a bucket because I hadn't noticed an unlikely spout in the ceiling.

This morning I walked around the mosques of Diarbakir and its alleys, then the market and even some churches. In one of these I was impressed by an ancient tapestry hanging on a wooden palanquin as old as the hills and depicting a crucifixion scene. I then made my way to the otogar, but it turned out that it wasn't the right one to Mardin; so I took a dolmus that conveyed me to the right stop. Unfortunately I realised I had taken the hotel key with me. I looked for a good soul to oblige me and take it back to the hotel, but I couldn't find any volunteer in the short time before a rather sudden departure.

Here in Mardin there are Turks, Arabs and Kurds. In the shops you can talk Arabic and they understand you, or even get an answer in that language, even if the accent tends often toward the Mesopotamic one, with a ch-sound for kaf. Apart from that, I am in the process of spotting Turkish word in the Arabic dialects of the Levant or the other way round. Among other things I have found out that Damascus is called Sham in Turkish, that same beautiful and enveloping word that the Syrians call their capital in the people's language.

I delight myself in the beauty of this place, the sun and the view. It is nice to be idling here, observing other patrons on the terrace, the funny caper that the birds perform, maybe out of fun, when they fly against the wind and suddenly reverse their direction with a somersault in the air. Finally I decide on an exploration walk that takes me to see a madrasa and to get down to the lower street of the village, from where the view on the old town and the fortress allows me to grasp the actual size of the place. 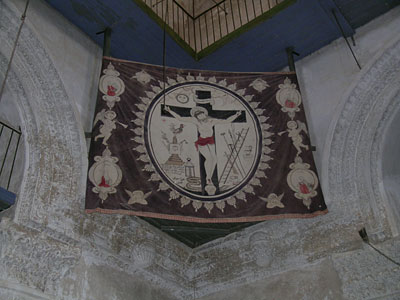 On the way back to the hotel after the fall of night I come across those two hitch-hiking Poles I met yesterday. I go out for a good dish of stuffed aubergines, then smoke hubble-bubble on the terrace while reading 50 more pages of the engrossing Da Vinci Code. In the night, the lights from few sparse villages in the Mesopotamian expanses at the base of the heights I am standing on glimmer neatly and remind me of the dry pure air in Jerusalem last summer. They tell me that the more distant lights are those of Aamuda, in Syria, and behind them lies Qamishle.

2 August -I get up early. I had left the two windows open and the warm air kept stroking me with soft gusts all through the night, even if in the first hours of the new day I covered myself with my sheet to take shelter from the fresher breeze. The call to prayer at dawn was like a bang roaring into my room from a nearby loudspeaker, at first with a suspect creak from a ruined tape that I didn't have the time to identify as such in the numbness of sleep, before it went off at the top of its voice. I bitterly noticed that the dawn formula says "prayer is better than sleep" and thought that whoever was shouting that, might as well mind his own business.

I had breakfast with a sweet bun and some baklava, a tea and a coffee in a lovely popular café of the square. I then tried to visit the Church of the 40 Martyrs, but it was still closed. Some boys in a jeweller's, that the café owner had told me come from Der Azzaafaran, advise me to take the dolmus to the terminus and from there walk the remaining 4 km to the monastery. It's a hard stretch under the searing sun, but with changing my sandals for trainers I manage it. I visit the monastery and a lay brother serves me as a guide. They are monophysites here, orthodox Syriacs, and their patriarchate is in Damascus. I walk back to the bus stop and ask to be dropped at the Fourty Martyrs' Church, where a group of young people from the Assyrian Youth of Sweden is on visit. They are the Syriacs of the diaspora that drained the Christian population from these regions. This church too is worth all the importance I gave it.

I leave to Mediat. Once there I badly need to eat something, so I sit in a restaurant and order some fruit. Then in the streets a child, Ibrahim, tacitly offers to lead me around the town and walk in the lanes to reach eventually a restored historic mansion from whose top floor terrace the view embraces the whole town. I hand one and a half lira to the child, who is jubilant, and takes me to the bus stop to Hasankeyf.

There is one hour waiting, so the driver gestures to me, so he invites me to sit down with his friend and sip a glass of tea. They are playing cards and I observe them; they take an interest in my travel itinerary, imparting advice in Kurdish, as if I could understand everything. But it's now time to leave: the driver tucks into my hand a handful of seeds to gnaw at and off we go. The road winds along charming valleys, torrid, but green towards the water that flows in a scanty stream at the bottom. 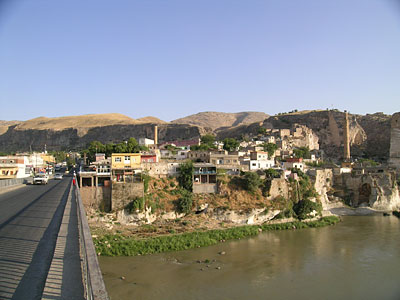 I get to Hasankeyf and take a room at the motel, then go out to explore the town pushing towards the imposing ruins of the ancient bridge, then on the opposite bank of the Tigris river where I have caught glimpse of other ruins to explore. In fact there is a fortress, from whose top you can encompass the grand panorama of the valley. At sunset the colours take on spectacular hues. Three young people come up to me, two boys and a girl. They are from Medyat and speak Arabic, so we talk a little.

I go down to the hotel, but I feel out of sorts. I've always drunk water from the tap or fountains, but it may not always have been potable. In one of the restaurants on the high street I meet an Italian lady, Mariangiola, who kindly offers me a Chinese remedy. I also meet her young Syrian boyfriend, from Raqqa, who I talk with for some time, to be later joined by the restaurant owner.

Before I retreat, I sit with the hotel guys at the door. One of them speaks Arabic, but very distant from the Syrian dialect, not very pure, interspersed with Turkish or Kurdish. It's always a means to communicate.

My room is like an oven, without windows, but at least I have a fan.