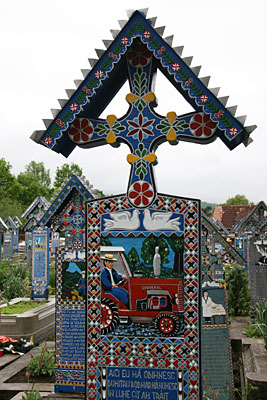 Sighet looks very different today, a Monday. At this early hour the streets are bustling with students going to school and people from the surrounding villages coming for their shopping, maybe attracted by the two competing foreign supermarkets that little by little will surreptitiously replace the old retailing patterns still made up of high street shops and markets.

I go to the bus station, just to find out that the only bus has already left. I come back to where the road to Săpânţa starts from the town centre and look for a ride. Soon two young people take me, clerks from Baia Mare going to interview teachers out in the countryside.

The merry cemetery is all made up of painted wooden crosses, not very old as it all started in 1937. That year an orphan boy had the inspiration of making a living with his ingenious invention: exorcising the idea of death with humorous lines carved on the churchyard crosses, themselves decorated with a colourful representation of the deceased one in his lifetime occupation. Until his death, this craftsman ensured himself not only fame and remembrance through the building of this original cemetery, but also a probably comfortable livelihood after conquering a position of monopoly in the matter of funerary art, if you consider that all the crosses are the work of his hands.

Out of the churchyard, a lady hails me from across her fence and invites me inside for a dish of sour cream and green beans soup. Driven by curiosity, I step into an overheated room of her humble house. The woman is wearing a headscarf on her gray hair and rustic clothes, not particularly feminine, which maybe make her look older than she is.

Old people here are not usually reluctant to look their age and wear headscarves, dark clothes and traditional costumes that set them well apart from the younger generation who have almost invariably adopted the international fashion. Seldom do women dye their hair, for instance, although in the towns the trend appears to be gaining favour with more and more people becoming slaves to the fashion and victims of the losing chase for a youthful look. In the modern world youth is a goods on the market as any other, and as we grow older we are take in constant reminders of the near obligation to ward off the effects of time at all costs, much to the delight of those involved in the lucrative business of products and services that promise to preserve or restore youthfulness. We should rather hope that our old age will never be a shame to us, but a pride, and that we won’t try to hide what we have become, trying to look what we’re not anymore.

This woman explains she’s been divorced since very soon after her marriage and her daughter had been born. Her sister, also divorced from an alcoholic husband, lives in Italy and is currently out of work. Would I know someone wishing to hire a trusted personal care worker?, she enquires. Would I have any single friends that could make a good husband for her sister?

She’s not too put off by me shaking the head amused, and even hints at her own subdued quest for a husband that will probably wrench her from a drab life and make her know the exotic things that up to now she’s had to wait for patiently until they presented themselves in the form of foreign tourists walking along her fence.

Surely I am not the first one she’s staged this gig to. After I’ve had the soup with bread, she brings me a walnut cake specifying that Japanese for walnut is so-and-so. Besides, a few words in Italian, a few in English amid many more in Romanian reveal that she’s used to dealing with a lingo that would put many others off. She also shows an address book bearing among others the contact of a Belgian tourist. I leave her a few coins and chuckling to myself I walk off delighted at this exhilarating encounter.

Buteşti is supposed to be the best village in Maramureş. I get here by bus, in 40 minutes, ready to be surprised, but the place isn’t anything to blow my mind: some wooden portals, but overall modern concrete bungalows. The inhabitants of the region have been able to redeem their previous basic living conditions thanks to remittances from abroad.

The interesting part of the trip is probably the bus ride, the most striking memory of which being the peculiar agriculture odour hovering in the cabin air, not disgusting, but very reminiscent of life in the fields. The people who were around Sighet in the morning are now making it back to their homes with satchels and shopping bags full of books or groceries.

The reason I’m not at ease exploring Buteşti is that I’m worried about getting back to Sighet. There are no more buses and the evening is near. However in this hitchhike paradise one doesn’t have to wait long and a young guy takes me in his Mercedes van to drop me at the crossroads, where soon I get a second ride to Sighet. I had an attempt at conversation with the first driver, but despite his very loud tone of voice the messages didn’t get through, so he turned the music up and I enjoyed listening to a catchy mazurka sung by a clear girl’s voice. At least there are still traditions in the air.