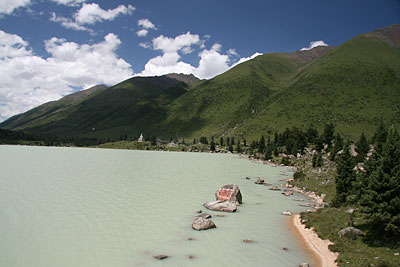 Niong gets up very early to catch the bus that will take him into Qing Hai as per his travel itinerary. We met in Ganzi a few days ago, and now we are parting ways in the very same place. Niong has been an interesting character to travel with and his attitude kept me amused. I knew from the start how trustworthy he was when he helped me out of the camera incident. The language barrier may have made entertaining conversation a challenging issue between us, but these were nevertheless good days in his company.

His self-assured manner always made him stand out. For instance, when it came to drawing attention in restaurants, he used the tone and loud voice the Chinese always take on when addressing a waiter, but he sounded nearly indignant as if he were a customer who’d just found a fly floating in the soup.

However, he’s not haughty. As you are expected to do in , he was just playing the role of the customer, while the waiter had to stick to his subordinate role. This didn’t prevent him from occasionally entertaining  the waiter, or indeed other guests, with some humorous remark or a funny facial expression. The day I said I would like to eat a vegetarian meal, he went up to the restaurant owner and slid his finger on his lips complaining they had become so dry for lack of vegetables.

He’s quite friendly and freely talks to everybody. I was a bit embarrassed when he spotted two beautiful girls in a monastery and appreciated their good looks in front of them as if they were goods on sale, while they lowered their eyes in a maidenly fashion.

Sometimes his attitude reminded me of an excited child wanting something at once. Like when I had just stepped out of the prayer hall, and he hysterically called out my name Andelu! Andelu! because he wanted me to take a shot with the monastery chief. I was rather taken aback to see him as a devout Buddhist.

Without Niong I shall now resume my itinerary. It’ll be an easy day, no long journeys, no early starts, only a couple of hours’ drive from Ganzi. At 11 I am at Manigango, a town pivoting on the highway crossing it. There are roadworks now and the passage of lorries and vehicles makes it a rather dusty place, but keeps it alive. When the traffic is over in the afternoon its lapses back into sleepiness until the evening, when a second surge of cars comes along and some people stop for the night. It is in fact a natural stage on the highway and the turning point to reach Yushu in .

There are two big hotels that fill up at night, but when I arrive in the morning they are still empty. I get a dorm bed and the room is all to myself, making it tantamount to having a private room if only the bedding had not been used for the last month without a change. Luckily I have a sleeping bag. The shared toilets are disastrous and they add to the long list of Chinese restrooms I have visited and could write a book about with plenty of shocking details, which would probably not pass through safe browsing controls.

Thirteen kilometres from Manigango there is an alpine lake formed by the thaw waters of a glacier. It looms as an extraordinary pool of azure opaque waters in a stunning mountain setting. I hike for an hour along its shore amid the fur trees that border it all around, with a mind to reach the opposite side just in front of the glacier. The path only reaches a certain point, then gets lost in the thick forest and the shore becomes abrupt without leaving any passage from the water’s edge. 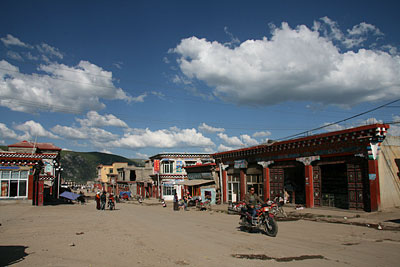 Walking in this apparent absolute loneliness, I can feel the burden of an unfamiliar environment that’s too still and vast, unknown dangers possibly lurking in the air. Last night I was going to brew a nice mug of black tea, when some tourists insisted I should drink their Puercha, which tasted like an infusion of green fodder. I was then shown their photos of , among which a wonderful lake of supernatural beauty studded into a limitless expanse of absolutely bare mountains. I gaped in amazement, but it was so unearthly and desolate that it projected me into a spiral of thoughts that made me feel completely abandoned by humanity and marooned on a desert planet lost in the space. Now this feeling comes back and makes me uneasy. I want to turn about.

By the shore I meet three monks washing themselves in the icy water. I sit down with them. They offer me some of their fatty home-made yogurt and I give them some onion grass flat bread. Company is never too hard to come by.