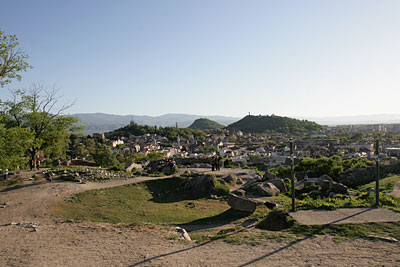 The wind has swept the sky to a state of absolute clearness and from the hilltop I can admire an enchanting view of the town of Plovdiv that stretches deep as far as the horizon. Snow-capped mountains provide a distant backdrop to the plains that surround the inhabited centre. By contrast, the sunrays not only warm my body chilled by the fresh breeze, but also tinge the scene in warm shades. A distraction to my blissful contemplation, the high-speed highway swallowed by the hill below me sends up a noise of passing traffic, amplified by the shape of the natural basin. Seagulls float in the sky.

Somehow the atmosphere is one of the Orient, possibly created by that single pencil-shaped minaret. More than 50 mosques stood in town at the end of the Ottoman era, and this last one towers as a remainder of a long domination that lasted roughly five centuries. A minaret would be an unusual sight in any western European landscape; here creates an aura of exoticism, and nevertheless it is fused in perfect harmony with the town centre all around.

Bulgaria sits at the boundaries of Europe, and this panorama bears witness to its position straddling the east and the west. The colourful historical houses are reminiscent of the Turkish style, with parlours ending in bow-windows and interiors decorated with carpets and superb wood carving. Their symmetrical structure is often broken by planes that stick out obliquely from the façade to capture the best exposition to the sun.

But it is not all about appearances. The local lifestyle is impregnated by the customs of the Turks and the Greeks. The smell of grilled meats wafts around restaurants and the terraces of cafes are crowded by punters that spend leisure time in the shady areas sipping coffee and smoking heavily.

This afternoon I met another component of this multifaceted culture at Buchkovo monastery. A leitmotif that has accompanied two millennia of Bulgarian history, the orthodox Church looks as unchanged as the wooded landscape I had to cross to reach the monastery.

The church walls were so blackened by centuries of candle soot that it was next to impossible to make out the subject of the frescoes. Murky and mysterious as it might look, it was a lively place where worshippers performed their acts of devotion, lighting tallow candles, prostrating and kissing the sacred images. Decades of Communist rule have not been able to blot it out from the national culture.

Only the iconostasis stood out with plates of shining gold around the icons. In the darkness it seemed to give out own light. A bearded monk draped in a black robe watched sternly on. His flowing white hair gave him a contemplative look as if he came from another world. The appearance of another monk crossing the cobbled courtyard holding a pair of pliers broke the spell and brought the man down to my own dimension as someone following practical pursuits. 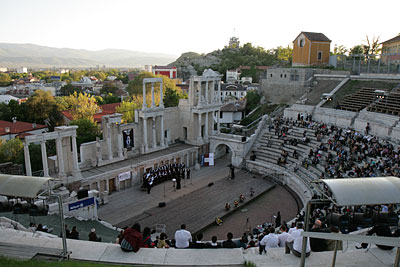 The Roman stadion under the mosque square and the Roman theatre are beautiful examples of yet another era of Bulgarian history. Earlier the theatre stands were crowded for the performance of religious choir music under the direction of a black-clad priest. Some Turkish women were coming out of the precinct, their hair tucked under Muslim headscarves. It was very suggestive to observe this refined ancient structure, but even more to think of the overlapping of cultures, the encounter of East and West, the mixture of past and present.

Back to the hilltop vantage point I started by writing about, the gaze sweeps over the countryside, interrupted only by the chimneys of a few abandoned factories that seem to provide a materialistic counterpart to the mosque minaret.

The place is scattered with Thracian ruins. Lovers have convened to enjoy the sunset, if not their intimacy, surrounded as they are by other young people who play, read or joke in merry company. It is good to be sitting amid the rock outcrops and the ancient stones. Everything points to the depth of a rich history.