On the bus to Anshun I met a family of three on a week-long trip to . I was surprised at their minute organisation. Everything down to the smallest detail had been planned, including the reservation of tickets for the various attractions – hardly my style of travelling. They suggested I should stay with them, but I rejected the idea of being a wheel in the cogs of their arrangements and found an excuse. As soon as I put down at a better hotel than last time, I got a call from my friend Junwei on the reception phone. He chatted for a long time joking in his usual good humour which made me feel well cared for even from his distant hometown.

I got up in time for the early Liupanshui train, not after I’d had a disappointing noodle soup for breakfast with plenty of pork fat melted in the stock. The carriage was a one-decker, like in long distance trains, and passengers sat facing each other across the stump of a table. Taking a seat, I aroused my neighbours’ curiosity, but however much people were interested in me, this time I was not disposed to talk. I meant to finish reading my engrossing novel Aziyadé.

My neighbours were not put off by my poring over the novel, though. In a heavy local accent they soon asked me the ritual questions to which I obligingly replied. My attention now diverted, I noticed the scene that was taking place on board. Train attendants came along the aisle carrying plastic hampers full of various goods that they declaimed and pushed on the passengers. There were all sorts of silly little gadgets, like spins, magic cubes that folded flat, nail clips and scissors, barking toy dogs, and of course food, the only item that didn’t require presentation or sophisticated persuasion techniques. One of the attendants in particular was a born seller and a bit of a showman. He presented a manicure kit that like all other items sold for a mere 10 yuan. He was so funny that he drew many smiles and entertained an audience that reached as far as earshot. Other attendants were duller, but not less effective. They broke the monotony of the train journey and the passengers reacted enthusiastically.

By the end of the ride a lot had been sold. A man was trying on his new plastic belt, all the children had got toys which they had played with for five minutes and then forgotten, the adults were all munching at some packaged snack. I looked across the aisle and saw a man who was putting his newly bought tweezers to the test by plucking hairs out of his nose. His face contorted in a grimace of pain as if it was not to be expected.

In Liupanshui I had to get off the train and continue by bus. We climbed in altitude, crossed beautiful conifer forests. The weather turned to overcast and, higher in the mountains, rainy. The grey clouds were not passing. Finally I got to the town of , with a motely population made up of the different ethnicities that live in the surrounding countryside. 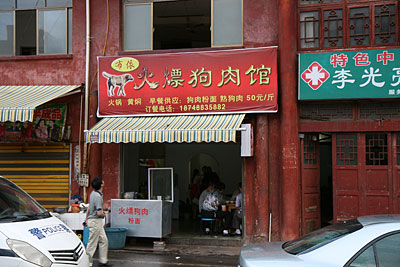 A first look at the market revealed a mine of interesting faces. Probably I was as interesting to them, if I were to judge by the expressions people put on immediately they spotted me. I saw several dropping jaws and wide-eyed faces, and wondered if having two heads would have aroused equal surprise. I could tell some would have liked to express something, but not knowing how to address me the most they came up with was a high-pitched hallo followed by a nervous giggle that was intended more to the people they were with than to me.

Weining may have been a disquieting place to many, but I didn’t mind, even in spite of the dog meat restaurants. Above all, after a long series of beds that were as hard as stone I had at last got a soft one.