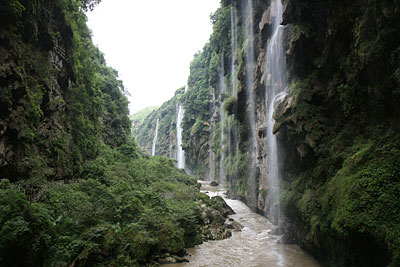 I moved on to Xingyi with excitement. I expected a lot from the journey and was not disappointed. The smooth highway crossed a landscape strewn with conical mountains and gouged by valleys across which a few impressive bridges showcased the achievements of Chinese development, even in this poorest of regions. The most remarkable was a suspension bridge, held by two parallel rows of red-painted cables, that spanned a deep valley dug by a turquoise river. The underlying vegetation spread from the river banks up to the mountain tops, just where bare rock showed itself on the peaks. It was an incredible juxtaposition of natural beauty and man-made prowess.

But to remind the traveller of everyman’s living conditions, even the tiniest patches of terraced land were sown with numbered plants of maize, and humble farmhouses were scattered around the countryside. In contrast to the signs of a hard life, at the end of the journey I came in sight of a modern gleaming town with lots of shops and pleasant urban spaces. It was Xingyi.

Malin River Gorge is a deep cut in the surrounding plains. Consecutive flights of steps reach down to the level of the stream and then the paved trail unfolds parallel to it. The sheer walls of rock are lined with a rich humid climate vegetation of ferns and mosses; surprising rock formations of travertine look like stone fungi clinging to the cliff. A number of waterfalls create a discontinued sheet of spraying waters.

It is not allowed to stray from the path, in accordance to the Chinese concept of enjoying an attraction. All must be regulated: whether it is natural scenery, art, archaeology or a monument, it is to be visited according to a fixed pattern, leaving no space to free will, improvisation or adventure. True, this place would probably have been difficult to enjoy without some sort of preparation, but in other countries it could hardly be administered to the public in such a subjugated form. It wouldn’t probably have been appropriated by the authorities in the first place, because a natural resource should not be usurped from everybody’s free enjoyment in the first place. They bombard visitors with “Safety first” signs, but sadly this organisation is less to the benefit of the users than to the advantage of the authorities, as it is local governments who cash is on entrance fees.

Knowing , it was not a surprise to find a ticket office rather than a free trail and signposts to embark on a hike and visti the place on one’s own. I was nevertheless taken aback by the lift shuttling up and down in the crystal-lined shaft, definitely out of place in such a wild environment.

I was prepared to leave Xingyi on the second day, so much so that I’d already booked a ticket on the morning bus. But by chance I caught a glimpse of city bus number one saying it terminated at another scenic spot: the . After coming all the way here, I couldn’t leave without seeing this place too. The weather forecast didn’t give clear skies and I’d have to return the bus ticket at a cost of a few tens, but I took the risk. A prostitute accosted me near the bus station and I answered her innuendo question only to realise I had naively taken her Mandarin words at face value. I made straight to the ticket office. 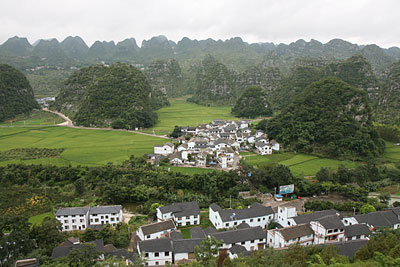 On a misty day, the typical climate, I arrived at the . From the tourist road  that cut the hill at mid-height an idyllic landscape presented itself to the visitors’ startled eyes. The beautiful pattern of verdant rice-paddies, white villages and dark green woody hills looked as if it was out of a fairy tale book.  In a month the rice ears would be yellow ripe.

The quaint villages from above seemed hardly affected by tourism, but nearby there were bike rentals and other tourist services on offer. There were also authentic street markets with vendors selling only few goods each. The rural soul cohabits with a considerable presence of tourists, but the old rhythms are preserved for the most part, otherwise the fields wouldn’t be tilled in such an admirable fashion and the beauty of the place would be lost to extensive farming. As usual, no foreigners.