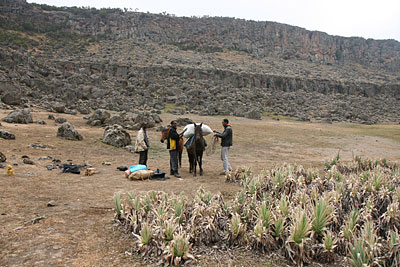 If the first day in the Web Vally had filled me with expectation for what still lay ahead, the second day was rather disappointing. We backtracked for a very long way, then our route cut across the hills to the main road, but instead of pushing further into the national park we were moving around its edges towards Dinsho. We met people colourfully dressed coming out of the Friday mosque service; all around were meadows with imposing juniper trees and farmland. Finally my fear that we were heading for the road proved correct. After yesterday's wonderful wilderness, seeing asphalt dampened my enthusiasm and made the tiredness of the long march suddenly felt in my legs.

We headed into the prairie and reached abandoned rangers' houses where we camped. The plain all around was not farmed; wildlife was abundant and undisturbed. Warthogs scurried freely, packs of reedbucks and nyalas were grazing always on the lookout. A male buck with twisting antlers cropped up from the bush.

To watch wildlife you don't need to go far into the national park. It is found just along the main road.

The sky was clearing up a bit, but it was time we returned to the camp for dinner. We crossed the stream that was grown with beautiful tufts of grass. The handlers were cooking pasta in the fireplace and had prepared a sauce with tomato paste which I haven't been able to stand since I felt sick after eating it last year. I had white macaroni. There was also a plentiful provision of chat. They spread a soft blanket on the floor and we sat around the fire to chew the leaves together. The stripped sprigs were building up in a heap in front of the fire, while the fresh ones in the plastic wrapping grew fewer and fewer. After a while my mouth felt parched and it became necessary to sip tea, sometimes with milk, sometimes black, but always abundantly sugared. As a result of this, when I laid down in my sleeping bag I could get only light sleep: the chat, the altitude, and the caffeine all worked hand in hand.

We got up late, there was not a long way to go that day. One of the horses felt an irresistible attraction for home and didn't wait for us before it plodded on in its direction. I tried to reach it, but realised that if I walked behind it paced faster to avoid me. I then tried to make curves around its trajectory, but the horse was always faster than me walking in the bush. At last the professionals intervened, called the horse and it finally obeyed.

There was nothing notable in this last trekking day. I left a critical feedback at the park headquarter. I was invited to fill it in in private, but I was the only trekker that day and anyway I didn't care to speak my mind. In any case the scout took my sheet and folded it into his pocket, just for the sake of anonymity.

I got a bus to Robe and then to Goba where I spent a relaxing afternoon and got ready to leave the next day at 6. I ventured to have my second kitfo, or raw meat. It was delicious, probably the best I had ever had, but as always I ate it with a lot of circumspection, especially when I asked the waiter what the white substance on the saucer was. He looked perplexed, then pointed at his stomach and said "Cow!". The explanation left me with tormenting doubts, but I later found out it was only cheese.